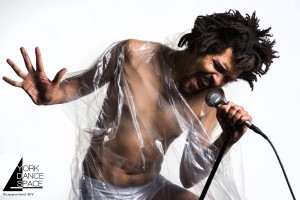 Accessible from the first moment, the genuine and hilarious Ensemble Improvisation has nothing to do with the austere world of traditional dance forms that newcomers might expect. Director-performer Lewys Holt leads a small cast of performers including Sally Doughty, Pete Shenton, Eleanor Sikorski and Inari Hulkkonen. They wear joyful, colourful everyday clothes: a glittery blue t-shirt, flowy green trousers, pink jeans. The stage is brightly lit, the set is bare except for a pair of microphones. To the left of the stage, Tariq Emam oversees a music station with a computer, drum and gong at hand.

The dancers’ presence is magnetic, proven in the audience’s silent observance of them standing or walking about on stage for a good few minutes before the show starts. As the title suggests, this arrangement is fully choreographed in the moment, the performers dancing to a stream of consciousness of words and sounds, feeding on each other’s movements, inspiring each other as they go along. Completing each other’s words and sentences, they create an absurdist, surreal narrative that recurs throughout the piece; centred on someone who is feeling “sad and mischievous”, lying in a hotel room, waiting for room service to bring their peanuts and pasta carbonara. Who knows what will happen next?

The performance is filled with hilarious gags born of the unpredictable nature of improvisation. It is a feast of free associations of thought, with flawless comic timing; you laugh, but you are also moved. It is a celebration of the thousands of ways in which people can express themselves even when words fail them. Shenton brings you particularly close to the cast when, grabbing the microphone, he attempts to unpick and put into words what Sikorski’s silent movements are communicating to him. This resonates with an audience asked to participate in a similar act of interpretation. Thrilled by the knowledge that something completely unexpected could happen at any moment, you watch as scenarios unfold while the bodies of the performers converge, separate and welcome each other, and their words tune in and out to effective, sometimes haunting music by Emam.

Hulkkonen leads the show toward a dreamy, lyrical ending with her last suggestion, recited into the microphone: “There was this bird in the corridors of my mind…” With this sentence, she evokes a moment of magical suspension, a perfect metaphor to close a show reliant on fleeting, organic moments. A bird, for some strange reason, flies into a building, only to realise its mistake and immediately fly away. This precedes the well-crafted, if sometimes puzzling, Plastic Soul.

Creator-performer Seke Chimutengwende, the soul behind the plastic, is also a commanding, talented performer, able to capture the audience’s attention immediately. Miles apart from the previous act, this is a rise-and-fall tale crafted with such meticulousness that it tends to get tangled in its own artistic fabric. Chimutengwende plays the mythical performer Plastic, an ever-morphing artist who is on a constant quest to change his style and his prerogatives, attempting to respond to societal and market pressures. Plastic speaks to the audience through song and dance, his actions framed by a series of videos played while he exits the stage to undergo yet another one of his transformations.

In the videos, a series of commentators (Season Butler, Charlotte Cooper, Justin Hunt, Harold Offeh, Efrosini Protopapa and George Shire) offer their insights on Plastic’s artistic journey, performing observations on the topics of innovation, reinvention and authenticity in a society in which art must continuously evolve. Can authenticity really exist? What is realness? Did Plastic reinvent himself naturally, or was it innovation for innovation’s sake (neo-liberalism’s favourite thing)? These videos create promise to parody themselves, and you anticipate they will eventually become totally and utterly un-serious. Unfortunately, they never really rise above the status of mere intellectual commentary, at times proving genuinely difficult to follow without getting lost or distracted.

In the meantime, from ‘alien’, Plastic takes on the roles of ‘star, ‘atom’, ‘insect’, ‘entertainer’, ‘prophet’, ‘machine’, ‘word’, ‘gesture’, journeying from wordy songs, disco lights and glittery costumes to nakedness, simplicity and exhaustion. Every metamorphosis implies a costume change and is generally accompanied by a new, dazzling lighting change (designed by Marty Langthorne). Plastic’s story is reminiscent of Elvis Presley, Michael Jackson and many other artists who have at some point in their career struggled to survive societal pressures.

Chimutengwende’s final dance, after the videos end, sees Plastic’s latest form, ‘gesture’; a delicate, tender, yet powerful rendition of the end of a career. There are certainly moments of beauty, mostly thanks to his strength as a performer, though they get lost in the cerebral structure.

These performances could not be more different, yet both provide plenty to think about (and a good amount of glittery costumes too).

Read more about the work of Lewys Holt here, and Seke Chimutengwende here.