Jack and the Beanstalk: Comedy for all ages 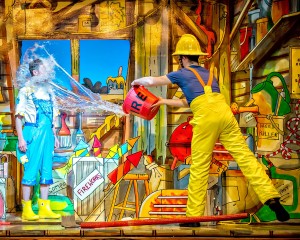 Berwick Kaler, Martin Barrass and their colleagues deliver a delightfully funny performance for people young and old in Jack and the Beanstalk.

This year, the play follows the story of Jack Manley (AJ Powell) as he tries to win the heart of his childhood sweetheart Jill (Suzy Cooper) and sells the family cow for a bag of exploding beans. These beans were created by the show’s antagonist, Dr McCarb (David Leonard), and sold to Jack by the Dr’s sidekick, Useless Eustace (Luke Adamson). Of course, the highlight of the show is Kaler as Jack’s mother, Mandy Manley, and Martin Barrass as his brother, Stanley Manley.

Berwick Kaler’s annual pantomime has become a staple of Christmas in York and his version of Jack and the Beanstalk makes it easy to see why. People who are new to the show would be enchanted by an artful portrayal of traditional panto but in a unique way. Those who have attended year after year are rewarded with various in-jokes and tropes. 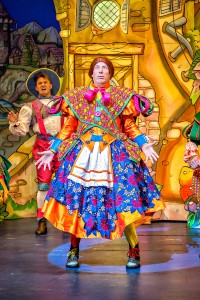 For the first act, the show sticks closely to the story, giving the audience time to get to know Jack and Jill, to enjoy Leonard’s winning performance as the shiny and camp Dr McCarb and, of course, to laugh at Kaler’s and Barrass’s entire scenes that are dedicated to jokes.

During the second half, however, the story seems to fall away as the play focuses more on pop culture references, particularly Star Wars – there’s glittering stormtroopers referred to as ‘super troopers’, Jill turns into Princess Leia and Eustace becomes a very feminine Darth Vader. There are also a couple of video scenes, which barely add to the story at all – although it was great to see attention brought to the brilliant cause that is the Air Ambulance. Of course, pantomime isn’t really theatre for people who only want deep story and characters – It is just fun in its purest form.

While each of the cast members was excellent in their roles, Kaler and Barrass were exceptional. Their slapstick scene in the shed was masterfully performed, with Barrass perfectly mimicking a cartoon character. Kaler’s many years of experience as a panto dame clearly show as he has got the ideal balance between panto performance and holding back just enough to make the jokes self-aware.

The real show-stealer, however, is the set created by Mark Walters. Its beautifully crafted, cartoon-like scenes aid the audience’s suspended disbelief and the glittering set pieces really enhance the Christmas spirit.

A joyful show from start to finish.