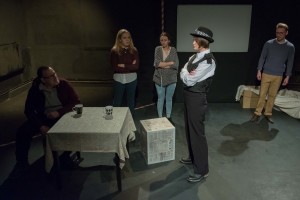 While unease and horror are evoked in their production of A Yorkshire Tragedy, dark humour and sadness pour out of The Taskers’ Trials. Although these plays are centuries apart, it’s striking to see fundamentally similar social struggles as a central theme.

A Yorkshire Tragedy, which was originally published under William Shakespeare’s name but is believed to have been written by Thomas Middleton, follows a Jacobean family who face financial trouble due to the husband’s gambling addiction. After the husband fails to strong-arm his wife into using her dowry to provide more money, two of their three children suffer the consequences.

In The Taskers’ Trials, a more contemporary play written by Bill Hodson, a family struggle to make ends meet after the eldest son goes to prison for having run over a young girl. The father and youngest son make money through selling contraband, the ever-giving mother tries to encourage her youngest son to do well at school despite the fact she tends to her friend’s cannabis plants, the eldest son hasn’t been seen in years and their daughter hopes to study law and escape her family.

Past and present social struggles

What is brilliantly unsettling about the juxtaposition of these plays is that while it’s easy to look at A Yorkshire Tragedy as an extreme story that could only exist in the past, it fits so neatly alongside The Taskers’ Trials. As two families across time must sacrifice their morals for financial stability, which is amplified further by the desire to preserve traditional family dynamics, important questions are raised about why such class-related difficulties are still apparent in society.

The similarities between the two plays are amplified by having the same actors across both plays, particularly as Mark France and Anna Rose James perform the parental roles in both. France is terrifying as the husband in A Yorkshire Tragedy but, if partly due to a kind of dark fascination, it’s always exciting to see what he does next. Meanwhile, in The Taskers’ Trials, he has a much softer demeanour and is very funny. As the wife in A Yorkshire Tragedy, James’ performance perfectly demonstrates the trembling fear but excellent composure of a woman in such a terrifying but devoted relationship. In The Taskers’ Trials, James is much more animated, which could be because her character is not in a shockingly abusive relationship, and she expertly demonstrates a completely different mother-figure with an unwavering devotion to a misguided husband.

Surrounding the relationships of James and France’s characters are Claire Morley, who plays the stoic university master in A Yorkshire Tragedy and the stern but empathetic policewoman in The Taskers’ Trials – another expert juxtaposition of two similar roles across time. Jai Rowley is dynamic as the Jacobean servant boy and both funny and endearing as the youngest Tasker. While Annabel Lee and Josh Dowden’s appearances are short in A Yorkshire Tragedy, it’s excellent to see them take more central roles as the self-believed voices of reason in The Taskers’ Trials. As Emily Thane often appears alongside Dowden in the Jacobean tragedy, it’s exciting to see their hair-raising fight scene as Luke Tasker and the boyfriend of the comatose girl. While it’s easy to dislike Luke before he appears on stage, Thane quickly wins over the audience as she plays up to his inner turmoil and shows that bad things aren’t necessarily done by people who are simply ‘good’ or ‘evil’.

While the action unfolds, Japanese Bunraku puppetry adds an extra storytelling dimension to the performances and the props covered in newspaper are an excellent visual cue to remind audiences that the people behind news stories are more than just scandalous names in print.