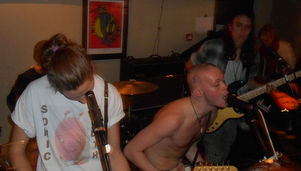 York-based alternative rockers Bull are set to go on tour and, to celebrate, they’ve made their new single, Bonzo Please/Eugene, free to download.

Bull have been making a bit of a name for themselves on the local scene over the last couple of years. The band have played a handful of festivals around Yorkshire, including YO1, Freedom and Galtres. They also made it into our pick of acts to see at York’s Little Live Music Festival, which ran for a week during September.

Bull’s brand of alternative rock shares similarities from some of the bands that ruled the genre in the 90s, including The Pixies, Dinosaur Jr and Smashing Pumpkins.

Speaking about the inspiration for their new single, vocalist and rhythm guitarist Tom Beer said: “I wrote both these songs one day last year when I was very bored and frustrated. The first [Eugene] reflects my mood on the day. The second [Bonzo Please] is about not being able to write a song and, more generally, how looking at other things for inspiration doesn’t help your own efforts.”

Bull’s tour will see them playing free gigs in Brighton and at a number of venues in London.

Have a listen to their track below. Don’t forget to download it if you like what you hear!