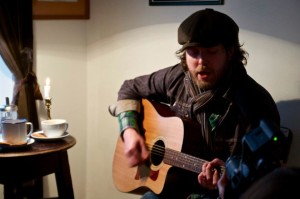 Over seven days, York’s Little Festival of Live Music will be bringing a mixture of folk, Americana, punk, rock, pop-opera and more to York Food and Drink Festival.

Now in its third year, the festival has grown from three days to seven days long and has received just under 400 applications from bands hoping to take part. These applications have been whittled down to just 28 acts to create the full line-up, with established musicians and up and coming performers getting involved.

With such a carefully crafted line-up, it was tricky to choose which ones we think are most exciting. Yet, we had a good go and here’s Arts York’s pick of must-see acts across the week. Any one you think we’ve missed? Let us know in the comments.

It’s tricky to pigeonhole Vesper Walk in one genre, their music fuses elements of classical, pop music and alternative rock.

They are a nine-piece, four hand piano-led band, with sisters Catherine Cowan and Lisa-Marie Baker behind the keys and providing vocal harmonies.

We reviewed their Fallen Angel show when it came to National Centre for Early Music in March, where they turned their music into a modern-day fairy story.

Vesper Walk are on at 6pm on Friday 18th September.

Pelico mixes indie, folk and rock to create their own energetic and upbeat music. The band are vocalist Brian Liddle, Ashley McGovern on guitar and vocals, Nick Gledhill on bass and vocals and Tom Taylor on trumpet, accordion, trombine, keys and vocals.

They draw influence from 60’s pop and 21st century folk. The band have been together since 2010 and have performed with such acts as The Hollies and The Proclaimers.

Pelico are on at 8pm on Wednesday 23rd September.

Drawing influences from the likes of Pixies, The Hives and The Strokes, Bull create American-style indie with a British twist.

They play on Thursday 24th September at 7pm.

Surf Sluts bring their own brand of psychobilly surf rock, singing songs about zombies, surfing and drinking. Their influences include The Cramps, The Ramones and Elvis.

They have been a band since 1999 and, in recent years, have made fairly regular appearances at The Fulford Arms, including at Behind The White Door.

Surf Sluts take to the stage at 8pm on Friday 25th September.

He’s a well-known name on the York scene, hosting a variety of shows as well as his own stage at Galtres Parklands Festival in 2014.

Boss Caine is on at 7pm on Saturday 26th September.

The Festival runs from Friday 18th to Saturday 26th September, except for the 21st and 22nd, in the Music Marquee on Parliament Street. Entry is free, however, any money raised during the festival will go to York Mind.