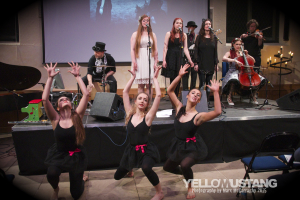 It’s a varied amount of elements all tied together beautifully and coherently under a single narrative that runs throughout the gig.

Proceeds from the debut Fallen Angel show went to Jessie’s Fund; a charity from York that helps children in hospices and special schools through the use of music therapy.

Stu Freestone opened the night with a spoken word slot, covering topics such as growing up, death and relationships with friends. Against the sound of piano music, it was a touching performance and a good warm up for Vesper Walk’s set. This was followed by a video clip from York magician Craig Stephenson – a good precursor for the mystic elements that pepper the main event.

A fairy tale with modern themes 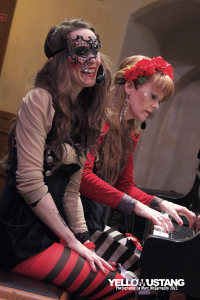 When Vesper Walk took to the stage, with a troupe of dancers and Stu as narrator, it became immediately apparent that this gig is about much more than just music. Projected images, lyrics, recordings and even the players’ outfits contributed to the story that made up the show.

The tale focuses on a woman called Sarah, who is tempted away from home by the promise of Hollywood stardom and eternal youth. Her two nieces set out to try to find her, experiencing fame themselves because of their piano-playing talents.

It’s a fairy tale story, with lessons about temptation and beauty that are apparent in the present day. The underlying theme is that beauty and fame are not everything and that people should not obsess over being pretty and young forever. This is why the use of Hollywood and the introduction of some of the shadier characters that often manipulated Sarah were so relevant.

National Centre for Early Music was a great setting for the show, with plenty of space for the players to move around, good acoustics and a look that is ideal for a fairy story performance. The only downside is that the central pillar occasionally obscured the view for some people sitting towards the back.

While it’s an interesting gig with a concept theme, Vesper Walk has not overlooked the power of the literary form. The story is due to be released as a book titled The Fallen Angel Wonder Tale, which Vesper Walk have created in collaboration with The Art Hutch.

Next up on Vesper Walk’s agenda is a trip to the Edinburgh Fringe, where they will be performing the Fallen Angel show for nine nights at the Merchants Hall.