The Book Club: Twisted, funny and it needs your vote 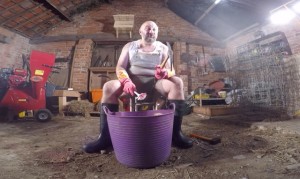 Andy Love stars as Chester Mapleforth in The Book Club.

Red Shirt films have put together a new funny, twisted comedy horror called The Book Club and it needs your help to be made into a full series.

The Book Club is done in the style of a documentary by Jamie McKeller and Jack Hobbs, which looks at the life of Chester Mapleforth, a seemingly ordinary middle-aged man apart from his taste for murder.

Although Chester is known to police, there’s nothing that they can do about his brutal killings. He and his village succeeded from the United Kingdom and formed their own country, Chestersburg. The first thing the residents of Chestersburg did was make murder legal, letting them engage in their favourite hobby.

The pilot episode is currently in a contest at DailyMotion, with the promise of a £2,500 budget to get a full web series made and show it to plenty of fans looking for a comedy horror show.

When asked how he came up with the idea, Jamie said: “It’s worrying, isn’t it? I don’t want people to worry that I daydream about hacking people to bits in my garage. Firstly, I don’t have a garage and our flat is quite nice so doing it indoors isn’t really an option. Secondly, I’m mostly about peace and quiet so wouldn’t really be a fan of the inevitable noise and disruption killing people so enthusiastically would bring.

“I suppose I do daydream up ideas. I tend to roll ideas around in my head while doing day to day things, distracting myself from the laundry or shopping trips. I scribble stuff down, mash it up. Move it around. Some ideas survive, some don’t. I have a lot of notebooks filled with mad scribblings. I’m not sure where it comes from, but this latest project does seem to have a few people worried.”

The majority of actors in The Book Club are from York. Jamie revealed that Andy Love was his first choice to play Chester Mapleforth, explaining: “I had to bend space and time a bit to fit around his schedule but there was just no way I could see anyone else playing that role.”

If the full series does go ahead, it will be eight episodes, each around ten minutes long. In terms of the plot, Jamie revealed a little bit about what it has in store: “Each episode focuses on a single household, and we haven’t met all the families yet. It’s highly unlikely many will make it out alive, because how could they? I can’t let these characters survive as they’ve strayed so far away from the light there’s no coming back.

“I will say this. The final episode will eat a fair bit of the budget, and involves armed police and a Hot Fuzz style shoot out. Along the way we’ll spill a lot of blood and guts, eat a lot of cake and drink loads of tea.”

To watch the pilot episode, head on over to the DailyMotion website. If you like what you see, give The Book Club your vote.