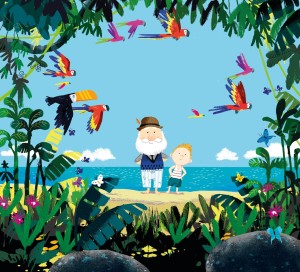 Benji Davies’ charming picture book is a firm favourite at bedtime in our house, so when I saw there was to be a theatrical adaptation I was both excited and intrigued.

How could this simple story of big adventure be brought to life?
Would it be the same as our beloved bedtime tale? Would the creators see what I see? Would I be disappointed? I wanted to love this production so much and I’m glad to say I really did.

Never before have I seen a theatrical adaptation of a book that so faithfully recreates the feel of its original.

From music to set, from colour choice to casting, every element oozed with the essence of Davies’ story.

Engine House Theatre’s production was clearly a labour of love for director-adapter Matt Aston. His script, although staying true to the book, perfectly fleshed out Grandad and Syd’s relationship and gave us two characters to really care about, brought to life skilfully by Marcus Knibbs (Grandad) and Adam Ryan (Syd).

Ryan bounds onto the stage at the start and introduces us to Syd and his world, and within seconds you forget you are watching a fully grown man as the actor exudes such a childlike energy and enthusiasm.

The only way I can describe Knibbs’ Grandad is “perfect”; he is everything I imagined him to be. He brings a lovable roguish quality to the character and makes it abundantly clear why the young boy adores every moment they spend together.

The chemistry between the two is so strong that you can’t help being drawn into their fun-packed world – a world they create so believably that towards the end, when Syd returns to Grandad’s house looking for him, every child in the audience cried out, “He’s on the island!”

There were such lovely little touches through out the performance, like small hooks and holes all over the set for Grandad to hang his stick on, not labouring the fact that he uses one, but making the shift to the island more magical when Grandad proclaims that he can manage without it there.

The set is simple and effective. The shed-like structure’s hidden windows, doors and boxes reveal an abundance of surprises. The house itself was used to greatest effect as a screen for projections, transforming from home to ship to island shack and beautiful jungle vista with the use of Davies’ original illustrations.

Grandad’s Island is a charming show which is as thought-provoking as it is beautiful. Its energy, catchy tunes and magical storytelling kept the entire audience gripped right up to its final tear-jerking moments. This beautifully acted, lovingly presented bundle of fun is a real theatrical treasure.