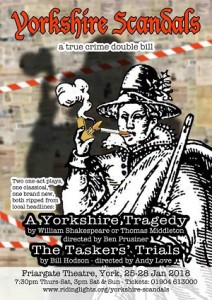 It is a bittersweet time for the arts and the news in York, what with the only paid local arts critic role being threatened with redundancy. The city’s independent art scene thrives as ever, and we strive to document the full, rich programme of events taking place in our city. Inevitably, where the money dries up, other resources follow, and we are looking at a future with decidedly less coverage. So what happens to the art that’s doing its own reporting?

Local independent theatre companies Re:Verse and Wildgoose have teamed up to present Yorkshire Scandals: a double-bill of dramas inspired by true crime tales haling from Yorkshire, with a focus on class, control and the importance of the news. Re:Verse’s Artistic Director Ben Prusiner will deliver Shakespeare-or-Middleton’s classic Jacobean script A Yorkshire Tragedy, which he intends to “dare to treat seriously”, transcending the barriers of the stifling violence through the use of traditional Japanese Bunraku puppetry.

Meanwhile, Andy Love, AD of Wildgoose, has commissioned an original piece inspired by the themes of AYT. Writer Bill Hodgson’s new dramedy The Taskers’ Trials centres around modern family the Taskers in the aftermath of a devastating accident. It’s not all bleak mid-winter happenings though; both stories focus on characters who are full of love, passions and intense reasons for continuing along their paths. Yorkshire Tragedy promises a compact literary feast, complemented perfectly by light-hearted, tender comedy in Hodgson’s writing – another little-known gem of heartfelt humanity.

Yorkshire Scandals will run at Friargate Theatre from 25-28 January 2018 and is currently offering earlybird tickets until 31st December. For show times and tickets, visit https://ridinglights.org/yorkshire-scandals/

Please note: Due to adult themes, the show is suitable for ages 14+.