The tension of proximity: Wait Until Dark puts blind actress in the spotlight 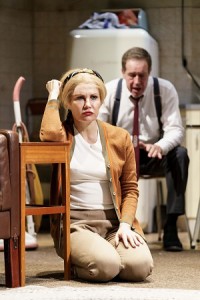 Director Alastair Whatley delivers a slick, smart production of this classic thriller, bringing us a well overdue inclusive cast with blind actress Karina Jones at the helm. The performances are tight and the dynamics interesting, with touching progressive arcs. Jack Ellis’s Mike is conflicted, affectionate, and finds where his limits lie. Tim Treloar is truly chilling as Roat, encompassing in turn both the stereotypical rocking madman and a monster whose real horror is in his unpredictability.

David Woodhead’s design translates the tension of proximity throughout this Hitchcockian choreography of perfectly tuned sound and light. Every change is palpable, breathless.

The exposition is rapid-fire, enough to skip the recap for those familiar with this well-known story but perhaps a little too presumptuous for a newborn audience.

What follows is the thrilling experience of the three crooks essentially performing a duplicitous audio drama for the sole benefit of Susy; their initial fastidiousness no less captivating than their inevitable carelessness.

From the moment the tables are turned, the pace and energy snowball right through to the electrifying finale, which is played with finesse. There are moments where the action seems to skip a beat, but the rhythm thrums through all the same. Pervasive is the sense of violation, of unease and exploitation. Any triumph is slightly overshadowed by the blackness of the deeds undone in Susy’s apartment.