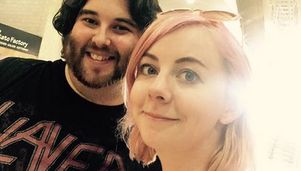 Wes Hall and Ellen Stubbings are the entrepreneurs behind Random Encounter.

The café is intended to be a place where fans of video games, comics, films and board games can come to discuss and take part in their hobbies. It will also host related events, including film screenings, games tournaments and themed nights.

Random Encounter is the brainchild of local entrepreneurs Wes Hall and Ellen Stubbings. Speaking about how they came up with the idea for the café, Ellen said: “We never had a clubhouse, so we decided to make our own”. Wes works full-time on Random Encounter, while Ellen works full-time as an illustrator as well as working on the café.

Ellen added: “We love everything the café stands for and realised there isn’t a place for people to go enjoy and discuss their favourite pop culture hobbies.”

To gather funding for Random Encounter, Wes and Ellen have launched a Kickstarter campaign that will run until June 28. They are offering a range of rewards to backers, depending on how much they donate, including t-shirts, watercolour paintings, lifetime memberships and Random Encounter branded mugs. In its first 24 hours, the campaign received close to ten per cent of its £10,000 target. If the Kickstarter does not reach its target then backers will get their money back.

As well as receiving funding from the Kickstarter, Random Encounter is part-funded by the Prince’s Trust – a charity that aims to help young entrepreneurs. For the past two years, Wes and Ellen have been working with the charity and have developed a fully-costed business plan for Random Encounter.