RENT: The musical that still rocks, 20 years on 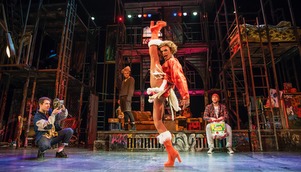 RENT is an imperfect musical about imperfect people, produced originally in 1996 and countless times since – and before; it’s a modern adaptation of Puccini’s La Bohème. It’s easy to see why we keep coming back to this tale comprised of author Jonathan Larson’s heart and soul. A landmark turn in musical theatre, Larson’s unusual, rocking score captures the lives of the marginalised citizens of mid-90’s East Village.

“How do you document real life
When real life’s getting more like fiction each day?”

Despite the obvious incredible talent of the cast, the atmosphere and chemistry fall slightly short. There is something missing in the room; only occasional moments hitting the mark and sending home the sentiment that should be firing a crowd in any decade. Lee Proud’s choreography is in turns over-ambitious and bafflingly meaningless and dull. The use of gritty industrial scaffold set from Theatr Clwyd mostly as a backdrop is a missed opportunity, and the music levels vary from too loud to be intelligible, to too quiet to have any impact. The love matches aren’t quite convincing either, though this is not the fault of the cast; the script simply doesn’t allow the breathing room to relax into their spark.

Highlights are Stefani’s sexy, emotional and empowered Out Tonight, Modestou’s masterfully observed Over The Moon and Santa Fe, performed with knowing compassion by O’Gorman, Cullum, and the impressive Williams, whom you fall hopelessly in love with at first sight. Thanks both to his sublime voice and Williams’ colourful performance, O’Gorman’s reprise of I’ll Cover You is simply beautiful.

As always, full-scale high-end musical theatre about the marginalised presented to paying middle-class audiences raises the question of who this is speaking to, and what its message really is.