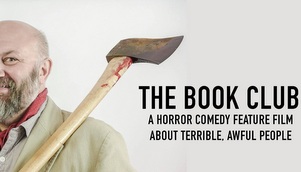 The Book Club is seeking funding to be made into a feature-length film.

Independent York-based film company RedShirt Films is working on its first feature film, The Book Club, and is seeking funding for its Kickstarter.

RedShirt Films is trying to reach a funding target of £25,000 to make The Book Club. In return, it is offering backers a range of different perks depending on how much people pledge – including set visits, premiere tickets and the opportunity for people to have full body casts made of themselves that will feature in the film.

The Book Club is a horror comedy set in the fictional village of Chestersberg. It follows a man named Chester Mapleforth, who has seceded his cul de sac from the UK and made murder legal as long as it’s kept within the postcode. A small film crew then find themselves trapped in the neighbourhood, recording the last six months of Chestersberg.

Among the cast members are Andrew Lee Potts, who has previously appeared in Primeval, Alice and Lucky Man. Jamie McKeller was the brain behind the film – he also previously created the webseries I Am Tim Helsing and the short film The Final Girl.

The Kickstarter will run until June 28th. If successful, filming will commence in July 2017 and end in February 2018. The film will then be sent on to various horror festivals and events around the world.

To pledge towards the campaign, go to their Kickstarter here.