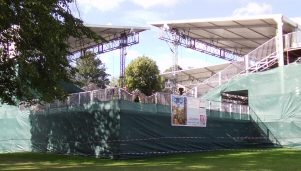 The stage for the Plays is being constructed in St Mary's Abbey with covered seating for 1,400 people.

With the frequent downpours that have been hitting Britain on a daily basis it may not feel like Summer at all. Yet this won’t stop the year’s biggest outdoor theatre production, the York Mystery Plays.

Lee Clark, in charge of press enquiries, said “the biggest thing we want to put across is that the show will go on”.

How can they be sure of this? Here’s the plan. Those passing through the Museum Gardens will notice the covered seating for 1,400 people in the ruins of St Mary’s Abbey. Plus, woodchips will be put down for the audience to walk on.

Actors ‘exposed to the elements’

The 500 actors involved, however, will not be protected from the wind and rain. “The actors will be exposed to the elements” said Lee Clark.

“Basically, what we have said is that if it’s a light drizzle then the play will continue” he said “if it absolutely throws it down then we will halt it for however long it takes to pass,”

“Judging by the weather we have had lately it won’t last for more than about 10 or 20 minutes and then the performance will be able to restart,”

The building of the stage and covered seating have almost been completed. They will remain throughout August and be taken down once the performances have finished.

The York Mystery Plays are one of four surviving mystery play cycles, dating back to the middle ages. In 1951 the cycle was performed as part of the Festival of Britain and has been running periodically ever since.

The script for 2012 has been adapted by playwright Mike Kenny, who previously adapted The Railway Children for the York Theatre Royal and National Railway Museum.

This year’s cast boasts Graeme Hawley, widely known as John Stape from Coronation Street, as Satan and Ferdinand Kingsley, who has performed for The National Theatre and the Royal Shakespeare Company, as God and Jesus.

To book tickets go to the York Mystery Plays 2012 website.