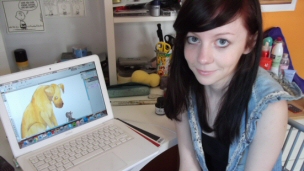 Ellen: 'I have never been into fine art and graphic design. I have always liked the story telling part of it.' Her picture here is titled 'Big and Small'.

It’s everyone’s dream to make money from doing something you love. Ellen Stubbings, a young illustrator from York, is doing just that.
Having just completed her second year of BA Illustration at Lincoln University, she has started selling prints of her work.

Her first piece available to buy online was a print of one deer declaring it’s love for another, titled ‘Love You Deerly’. Pun intended.

Animals with personality are a big theme in Ellen’s work.

She spoke to ArtYork about her ambition and what inspires her.

Q: When did you realise you wanted to be an illustrator?

A: Probably in A-level graphics because whenever we got given a project I always wanted to do illustration ones and my teachers always told me to do that.
I have never been into fine art and graphic design. I have always liked the story telling part of it.

Q: What sort of illustration do you most enjoy doing?

A: I think I am most into children’s illustrations so that’s what I want to do. With picture books most of the stories are told in the pictures rather than the text.
You can look at something and it will tell you the story instead of reading it and you can look again and there will be some extra detail in the background. It just adds something extra.

Q: Who would you say inspires your work?

A: I always get asked this at uni!
I would say Maurice Sendak, Shaun Tan and Edward Gorey.
I just sort of like anything that reminds me of when I was little so Maurice Sendak was one that I was always aware of, like Where The Wild Things Are.
Shaun Tan was one I found quite recently.
Edward Gorey I just like because it’s morbid. It’s good humour and it’s sort of supposed to be for kids but at the same time it’s kind of horrible.

Q: Why do you often focus on drawing animals?

A: I think I have always found that when I draw things they just turn cute anyway so animals kind of fit that.
I like that you can get parts of the characters’ personalities from the animal. Like if it’s a bear he can be clumsy. I find it easy to develop characters that way.

Q: When did you realise you could sell your work?

A: Probably sort of coming to the end of my second year.
I am quite aware that I will be finishing uni soon so I want to get my work out there.
Most illustrators promote themselves on the internet.

Q: What was the inspiration behind ‘Love You Deerly’?

A: Sometimes I just like to think of animal puns and go from there.
I just had that phrase in my head and thought that would make a nice post card or print or something.
I have a lot of them in my head but just not the time to put them into practice.

Q: Do you have any ideas for your next piece?

A: Probably something animal related. I want to get more prints out. There’s one about sheep that I’m working on at the moment.

Ellen’s shop, featuring ‘Love You Deerly’, can be found on Society 6.