Tutti Frutti crafts The Ugly Duckling for the modern age 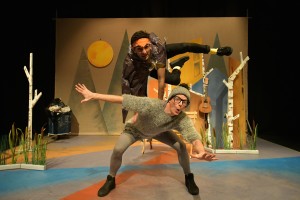 Over the past 26 years, Tutti Frutti has steadily established itself as one of the country’s leading children’s theatre companies. Their last production, Underneath a Magical Moon, was an incredibly beautiful piece of theatre, so expectations were high for their latest offering, The Ugly Duckling.

Entering the Theatre Royal Studio on what feels like a balmy summers eve, foil dragonflies hover around the reeds and the gentle plinky tones of a ukulele can be heard above the hubbub of the entering audience.

As soon as the house lights dim, the action begins and the young audience is instantly engaged by the entrance of Mummy Duck and her mischievous ducklings. As the mother scurries around the stage trying to rally her puppet brood into the nest for bedtime, a number of mothers crack a knowing smile as the youngsters in the seats next to them cackle with laughter.All the puppets in the production are very simple

All the puppets in the production are very simple creatures on sticks but are brought to life more through the actors’ interactions with them. Movement and physicality play a big part as the performers move between differing characters with ease. Danny Childs’ Ugly is the most adept at this, from newborn chick struggling to find his feet on land to graceful beauty as he embarks on his first swim. Ugly enters the pond and is instantly transformed – he glides, pirouettes and backflips through the water.

More poignant than ever

The original Hans Christian Anderson tale, although published over 170 years ago, is more poignant than ever in a world of selfies, fat shaming and Instagram, where image is everything. Emma Reeves’ script cleverly weaves in the story’s underlying message of beauty is only skin deep without labouring the point. It is most poetically put in Mummy Duck’s line “What you look like isn’t important. All that matters is what you do.” Unlike the original story, the text is peppered with vibrant and amusing characters – such as over enthusiastic Rocker Dog, Hipster Cat and Ninja Goose. Maeve Leahy and Daniel Naddafy artfully embody each creature that Ugly encounters on his journey to find himself, slipping seamlessly from one to another.

True to Tutti Frutti form, the production is visually stunning, especially the set pieces when Ugly first encounters the swans and when winter comes to the park. Catherine Chapman’s set has a really lovely home made feel with its block print back drop and sun and moon on a string, which is regularly flipped to show the passing of time.

Tayo Akinbode’s eclectic soundtrack of sweet ballads and catchy tunes drew the audience in and had a number of young and old onlookers jiving in their seats. Although it lacked the ethereal magic of its predecessor, The Ugly Duckling is a wonderful piece of children’s theatre, slickly executed and lovingly performed. It will keep little ones enthralled from its
energetic opening to its cheeky cliff-hanger conclusion.