Yellow is the Colour of Sunshine: a summer of simplicity 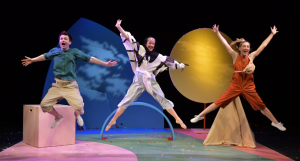 Connor Bryson, Holly Irving and Phoebe Stapleton in Yellow is the Colour of Sunshine

Acclaimed Leeds-based Children’s Theatre company Tutti Frutti return to York Theatre Royal with perhaps their most relatable show yet. For this offering, there is no fairytale source material, no mythical creatures – only the simple tale of two young children making friends. The simplicity of Yellow is the Colour of Sunshine is where its beauty lies.

We follow the burgeoning friendship of Hani (Pheobe Stapleton) and Yoshi (Connor Bryson), two children who despite their differences and the communication barriers between them (Yoshi is deaf and speaks only in sign language) form an instant and strong bond, becoming “best friends as long as yellow is the colour of sunshine”.

Trouble arises when the two friends find a kite but are unable to share; Yoshi makes Hani sad by not letting her play and, in turn, Hani wants Yoshi to feel the same so she lets go of the kite. Emotions are expressed brightly and basically by using colour. When they are happy they are covered in yellow confetti; sadness wrapped in a blue sheet and anger with smatterings of red, again displaying beauty in its simplicity as even the youngest audience member understood the symbolism.

With only one of the three performers on stage actually talking, movement becomes the show’s first language, with Bryson’s use of British Sign Language being taken by third performer and Movement Director Holly Irving and transposed into fluid movement and graceful dance.

I have used the word simple and basic in this review, but this show is anything but – it is clear that a lot of thought, love and skill has been channelled into its creation, with Kate Bunce’s bold, playful set and Christella Litras’ joyful soundscape working in tandem to support the wondrously childlike performances, all displaying the same message that life is much better if we just talk about our feelings. Yellow is the Colour of Sunshine brings a much-needed feel of summer to our current grey skies.

Yellow is the Colour of Sunshine is a one-hour show for children aged 3+ and their families, playing at York Theatre Royal until Saturday 22nd June, tickets available here.