Ian McKellen On Stage: Because You Would Like It 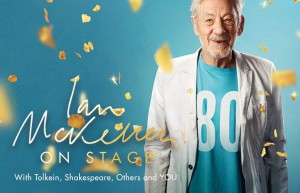 Defying the wealth of classics quoted and recreated with unearthly perfection upon York’s Grand Opera House stage, words cannot serve what it is to be in the company of Sir Ian McKellen. Opening with a casual reading from Lord of the Rings, he scoops up the full house into a warm embrace immediately, establishing the tone for the evening’s loving, playful ode to theatre.

A simple set of overlapping rugs creates a living room atmosphere like Jim Henson’s fireside Storyteller, played by McKellen’s friend John Hurt, later enhanced by a small table and chair pulled from his ‘skip’ (one man’s ‘trash’ is the same man’s treasure trove). Bedecked in an elegantly understated outfit of black and blue, with subtle changes for the second half, Sir Ian is utterly captivating throughout, every beat meticulously delivered with grace and dynamism.

After introducing a young member of the audience to Glamdring and birthing a new genre of Swords and Selfies, we are invited further into his heart as the evening goes on. He fondly regales us with tales of golden memories founded at university, in his coming out moment, in Frank Matcham theatres. The vibrancy of his love for his craft is infectious and untouchable. His repeat of Widow Twankey’s entrance at the Old Vic is so raucously delicious it persuades even this pantomime-avoiding reviewer to try it again.

Beyond the masterful gravitas we have all come to anticipate, Sir Ian is also an impish mischief, issuing cheeky but harmless ribbings to his co-stars from over the years. One highlight is his impression of a teenage Sir Ian acting “someone really old, you know… eighty,” staggering and shaking with every muscle like his life depends on it, before breaking out in a grin to murmur, “I did it long before Julie Walters.”

Not least of the delights of the show is the heart-filling sustenance that lies in his stories about finding his way into the queer community, celebrating the innocent to the intimate alongside the political – his story of being galvanised into coming out within a radio debate on human rights, to later be standing awaiting his knighthood alongside the same adversary, is humbling and comforting, while reminding us of the vast, complicated world we live in. Even in moments of conflict, he shows us that life is wonderful.

“and our little life / Is rounded with a sleep.”

The evening culminates in an extensive performance dictated somewhat by the audience; a truck of paperbacks is fished carefully from the skip, and we are introduced to the entire works of Shakespeare. Encouraged to call out one title at a time, the audience watches, rapt, as each is recalled without hesitation and we are privy to a memory of his time on that production, or a moving speech from the text, or both. We note “the two gay Antonios”, and “the two plays involving dogs”. Until, “I have nothing to say about Troilus and Cressida.” When offered a choice between two texts, one audience members calls out politely, “You could do both,” to which he replies, “Alright.”

And then, we are undone, by a rendition of the bard’s “wretched strangers” speech from Sir Thomas More; a rare manuscript salvaged and housed at the British Library, indicating the deepest devotion that Sir Ian commits to Shakespeare’s words. After this incredible three-hour performance, engaging to the last second, we are treated to another impish prank when during a blackout, he hides inside his skip so he can pop out when the light returns, “because you would like it”.

Sir Ian McKellen appeared on stage at The Grand Opera House York on Monday 17th June 2019, and continues to tour the UK. Find more information and recently-released extra tickets for some dates at the time of publishing here.