Hamlet at Shakespeare’s Rose Theatre: One may smile, and smile, and be a villain 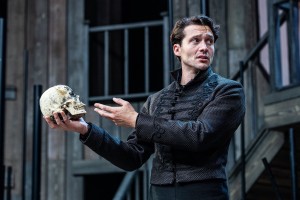 We all know this solemn tale of revenge guest starring the skull of “Poor Yorick” back to front, right? And yet somehow, the production team behind Shakespeare’s Rose Theatre manage to bring fresh mischief and flair to the most quoted and studied play ever written. It’s so easy to misread Hamlet as a dry, drawn tale of woe and dwelling, to stuff these clever “words, words, words” into a dusty artefact in your mind’s eye and leave them there for academics to fuss over. But that would be doing yourself, and the play, a great disservice.

The grand thirteen-sided playhouse recreates the authentic Elizabethan ambience of theatrical events of the era, complete with wagon performances in the surrounding village in the run up to each showing. Completing the aesthetic are the oak-framed, reed-thatched Bear Arms pub and an Elizabethan garden with ornate box-edged beds of flowers and herbs, and a water fountain. Open to all to wander, the sun-basking village sets the tone perfectly for the day’s entertainment. Four hundred and twenty years on, it turns out that similar things please us.

Helmed by the charismatic David Oakes (fittingly resemblant of Mads Mikkelsen) as the young Danish prince, the excellent, diverse ensemble cast of this production deliver a captivating rendition of this timeless thriller. One can’t forego a wink to the recent Good Omens’ depiction of Shakespeare’s encouragement of audience interaction (“Come on, Hamlet! Buck up!”) in such a playful, joyous celebration of the theatre itself. Oakes draws out the emotional truth in all the famous beats of Shakespeare’s classic text, illuminating a deep love for theatre’s power to transform and to galvanise, to eke out the watcher’s sense of moral conscious. Across the board, Yvonne Morley-Chilsholm’s voice and text work enables the cast to highlight the meaning within our collectively presumed second language, making Shakespeare human and accessible for all. An unusual highlight here lies in Hamlet’s confrontation with his mother Gertrude (Rina Mahoney), in which you truly feel the possibility of a connection being re-established and the conflict resolved. “On him… On him,” Oakes’ Hamlet urges, caring that she share his understanding.

Sara Perks’ costume and scenic design is deliciously intricate yet understated, providing all the colour (or monochrome) one needs in a stylish Danish thriller. Mourning black and marital white slide back and forth among the stately characters, and Christopher Madin’s composition is so exactingly in tune with the performers’ innate sense of pacing that the audience are rapt, thirsty for more throughout the three-hour run-time. Indeed, the groundlings hang rapt upon the lip, which is another joy to see – theatre reaching everyone, and everyone accepting its embrace, feeling their right to be there.

Serena Manteghi raises Ophelia from a wilting dote to an intelligent, respected pillar of integrity among a range of characters too quick to falter in their loyalties – even if they don’t always acknowledge it publicly, she appears to be a private hallmark of sense and assurance for her father and brother. Making a sing-talking mad scene a thing of truly great excitement upon which her fate hinges, which is no small feat, Manteghi dares toward sincerity, honouring our tragic heroine exactly as she deserves, and making her inability to reach those she needs in that moment all the more unjust. Marcello Cruz plays a pleasingly snobbish Laertes and sets the tone for the men in Ophelia’s life, choosing to demonstrate his love for her only when it suits his vanity, and discarding her with disgust when it does not. His and Hamlet’s grotesque display at her funeral is all the more effective for being shown up as the laughably callous act of pettiness that it is. All the cast give excellent performances and share brilliant comic timing, notably in Gordon Kane’s Polonius and Antony Bunsee’s Player King.

Some clear choices are made in the delivery of selected points in the play, which in these hands highlight some interesting facets to the dynamics on stage. A couple of hand slaps and barked orders aimed at women, or women playing men, by men, are defiantly disobeyed with nonchalance and without repercussion, making some of the more misogynist and incestuous elements palatable for a modern audience owing to their apparent recognition and exorcism. Fantastically nuanced and mutually supportive, this production is all the things it should be; convincing, disconcerting, complicated and potent.

“Thine evermore, most dear lady, whilst this machine is to him”

And thus, as long as we have breath, we will go on watching and performing this rich, layered, clever text. “Madness in great ones must not unwatched go.”