X+Y: An emotional tale about a maths genius 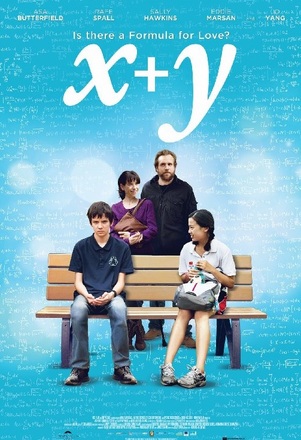 Asa Butterfield plays Nathan Ellis in X+Y, based on a real maths genius from York.

It’s a rollercoaster of laughter and sadness throughout X+Y as Asa Butterfield takes up the role of autistic maths genius Nathan Ellis.

Although he struggles in social situations, Nathan’s maths skills are so impressive that he ends up going to Taiwan to compete in the International Mathematical Olympiad. Here he faces tricky lessons about life, love and relationships.

The film is based on the real life story of Daniel Lightwing, a man from York who was part of the British team at the IMO during his teen years. He won a silver medal here. Daniel studied Maths at York College from the age of 15 and was part of the documentary Beautiful Young Minds, which impressed director Morgan Matthews enough to create X+Y.

Of course, Nathan’s story is a fictitious representation of Daniel’s life and there are aspects that stray from the truth. For example, Nathan’s father dies on screen, while Daniel’s is still alive and well. Daniel’s real life maths tutor was a lady called Miggy Biller, yet Nathan’s is a man, played by Rafe Spall, called Mr Humphreys.

Morbidity is usually a theme in British films yet it is still hard hitting when you see Nathan’s father killed in a car crash during the opening scenes. The inner turmoil of the characters thereafter, whether due to this event or other problems in their lives, is a running theme throughout. It’s the expressiveness of the actors that ensures viewers get caught up in the emotional ride.

Nathan faces grief at the loss of his father, discomfort in social situations, fear at having to act ‘normal’ in a country far from the people he knows, and teenage love. Butterfield skilfully pulls viewers into Nathan’s problems despite his character’s struggle to show his feelings.

Viewers are also hit with the troubles of the other characters. Nathan’s mother, played by Sally Hawkins, struggles with the fact that her son will not show her affection as she deals with the loss of her husband. This is something that Hawkins shows through moments of sadness, worry and an overlay of pretend smiles. Mr Humphreys’ dark sense of humour quickly becomes apparent as a front as he looks down the barrel of a worsening physical condition – while developing a relationship with Nathan’s mum.

Watching the fates of the characters unfold may leave you feeling tense and with tears in your eyes, although it isn’t all pain. There are some excellent moments of comic relief, such as Spall’s one liners. Expect some very heartwarming scenes too, such as Nathan’s memories of his father and his developing relationship with a female student (Jo Yang).