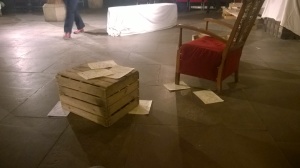 “Man is not truly one, but truly two.”

Theatre Mill deliver an engaging site-specific experience beginning before the venue doors even open, and carrying the audience through the lobby – now a period pub complete with warming fire, period-style drinks and posters, and committed supporting cast creating an atmosphere from the off.

“Of course, Madam, indoors as well!”

A brief encounter with an effusive, wary character called Rosie makes you feel welcome and drawn in, though you will be happy to leave her working on the macabre drawings of her visions that she shows you when the time came to pass through to the auditorium. 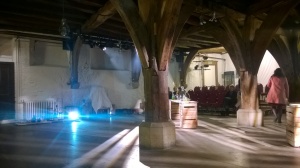 Audience members take their seats in the Merchant Adventurers’ Hall.

The medieval guildhall, Merchant Adventurers’ Hall, is converted to Victorian London with disconcerting ease, foreboding fog creeping from crates in corners and footlights dimming under a green haze. Maids, bartenders and staff of the house of Dr Jekyll flutter through the auditorium, whispering their worries over the master’s recent habits.

A rich flavour of London society

Each of the cast, save Weaver, play a variety of roles, appearing from dark corners and behind pillars in an all-new guise, giving the performance a rich flavour of London society of the time. All are impressive and winning. 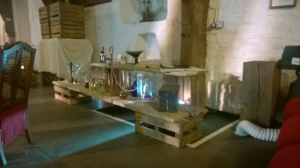 Weaver brings a worn, desperate quality to Robert Louis Stevenson’s driven doctor that tells from the first of tragedy and compromise. Indeed, the action begins with a sequence that is later revisited, instating the ominous tone and highlighting the precious value of hindsight in this particular ‘strange case’.

The soundtrack is also notable; a continuous, fluid soundscape that efficiently serves to amplify the feelings on stage. It works in seamless conjunction with the narrative-driven lighting design.

Violent scenes are slick and, dare I say, enjoyable, and handled as tastefully as gothic should be.

Theatre Mill are a company to keep your eye on for an exciting, satisfying storytelling experience.