Eureka Machines on how to fund an album the DIY way 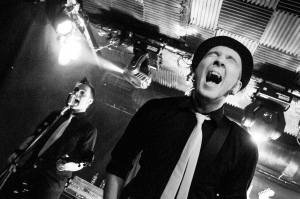 Eureka Machines have taken a DIY approach to the release of their fourth album, Brainwaves, and it’s proving to be a success, so how did they make it work?

The cult band from Leeds launched a PledgeMusic campaign for the album in January and hit 200% of their target in only two days. They are giving subscribers a free-to-download four-track 80s cover EP and are sending 10% of the proceeds to MIND.

Eureka Machines have had success with PledgeMusic before when they reached 500% of their target on their third album, Remain In Hope.

It seems that this band has something that draws in a dedicated fan base who are willing to support their career. Eureka Machines’ vocalist and guitarist Chris Catalyst, who is also in The Sisters of Mercy and Ginger Wildheart Band, spoke to Arts York about this latest PledgeMusic campaign and why it has been a success.

Q. How do you feel about the results of the PledgeMusic campaign so far?

A. Immensely gratified! We put a lot of hard work into our band and our music and it’s great to see that, by our fourth album, people are prepared to put their money where their mouth is and invest into our little group. It’s a two-way thing, we appreciate it and we do our best to repay them, and they seem to like what we give them, so everyone’s a winner.

Q. Why did you decide to fund the album in this way?

A. PledgeMusic works for us because it means we can go direct to the people that like us. People ask why we couldn’t just do that from our website. We could but keeping it under this umbrella means people trust the medium a little more, and also there’s a load of other great stuff on there. We are lucky enough to have a small but extremely ardent group of people follow us, and those people tend to go for the extras that Pledge encourages: the video updates, the extra tracks, the acoustic bits, all the stuff that we give people to say ‘ta’ for pledging. It works well for us, although I can appreciate it’s not for everyone. For me, the Pledge campaign gives people something to join in with, something that they can belong to. It’s giving people their fan clubs back.

Q. How did you ensure it was a success?

A. I suppose we’ve put most of the hard work in already, touring up and down the UK incessantly, working our arses off on our music, giving people stuff that they want. We worked hard on the last one, making sure that everyone enjoyed themselves and that seems to have paid off this time. Punters are understandably a little reticent to put their hands in their pockets – bands aren’t known for their business skills, and we’re no different – but now we have done the business once, they trust us to deliver something brilliant again. Which we will.

Q. Which artists influenced you musically to create Brainwaves?

A. On this album I wanted to go a bit heavier into my punk record collection for some of it and heavier into my British indie collection too. So there’s moments of pure Ramones/Pistols aggression, with sparkles of The Smiths’ weird brand of simultaneous joy and doom and a big lump of early Oasis swagger in amongst it all. It’s become, understandably, really uncool to cite Oasis as an influence these days but some of those early b-sides, which is really what I’m on about, were amazing and weirdly psychedelic in their own way. We’re into a lot of different stuff between us.

Q. What experiences went into the creation of the Brainwaves?

A. A lot of very personal and very difficult occasions throughout my teens and twenties, which I don’t especially like talking about. I might do one day but I’m a fairly private individual and I aren’t really the open book that a lot of musicians are these days. Suffice it to say, it’s a bit of a concept about how sometimes your brain can be your own worst enemy, but it’s a story with a happy ending.

A. I love 80s pop, there’s some great tunes and amazing writing in there. It seems like the last era where pop could be really clever and interesting without alienating people. I think that probably extrapolates to other areas of culture, too. Anyway, it gave us a chance to flex a different muscle and have a bit of fun. Especially important in terms of the rest of the music we’re making at the moment.

Q. Why are you making it exclusive to subscribers?

A. That’s the point of Pledge! You have to offer something to entice people to get involved, exclusive stuff like this, so that they want to join in. Subscribers are our Pledgers, our superfans, the people who are making our band still happen eight years later. So we like to reward them with this extra stuff. Everyone else can buy the album when it’s in the shops – or at gigs, or on our website, or whatever.

Q. What advice would you give to other bands looking for ways to get funding for their releases?

A. Work hard, gig constantly, throw away half of your songs, don’t get pissed before you play, practice a lot, buy spares, get a decent tuner. Hang on, I got a bit carried away then. If you have an audience, they will pay you so you can fund your band, it’s not difficult, you just have to realise they’re in the same boat as you.

A. It feels good to work to help someone else out other than yourself. MIND do an amazing job and, with the running theme of the album, I thought it was a good idea.

Q. Have you got any plans to play in York?

A. Not currently but I love playing for Tim at Fibbers and Chris at the Fulford Arms – two fantastic venues run by great people with independent spirit and DIY bonhomie – so we’ll be back before long!