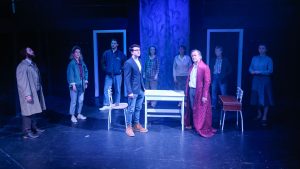 A York premiere and launch production for new theatre company Rigmarole, Andrew Bovell’s award-winning 2008 play When the Rain Stops Falling addresses the most important issue of our times: “Are we prepared to pass on the damage from the past to our children?”

Director Maggie Smales follows her successful local productions of Blue Stockings and the award-winning all-female Henry V with this emotional, layered drama telling the story of a family across eighty years and four generations. Spanning the globe between England and Australia, it takes the form of an interweaving domestic mystery unfolding as patterns of betrayal, abandonment and destruction are revealed. As horrific revelations are made, the pieces of the puzzle begin to fit together and culminate to complete the apocalyptic picture.

Alice Springs in the year 2039. A fish falls from the sky and lands at the feet of Gabriel York. It still smells of the sea. It’s been raining for days and Gabriel knows something is wrong.

Both vast and intimate, the Law family saga is a parable for the story of mankind. We are at the point of extinction, and it is of our own making. The unpalatable act of one man turns out to be a metaphor for the collective harm that human beings have wrought on ourselves and our world.

Forgiveness, atonement and requited love are the mighty, vulnerable open questions left hanging in the air after the storm.

Smales says of the play, “It is spine tingling and devastating but crafted with delicacy and humour.” Exacting exquisite poignancy through an excellent cast completely in tune with each other, Smales employs some of the techniques used by Frantic Assembly (Things I Know To Be True) to create a physical language that is integral to the storytelling. The nurtured fragility made real by the ensemble is so affecting it leaves members of the audience rooted in their seats for several minutes following the climax. The show also features a stunning original score by acclaimed local composer Sam McAvoy and powerfully inventive lighting, making for an invigorating and rewarding piece of thoughtful theatre.

When The Rain Stops Falling is playing at John Cooper Studio @ 41 Monkgate until Saturday 16 November – further information and tickets available here. *Please note: the play contains challenging content and is recommended for ages 14+.