The Woman in Black: the wonder of mischievous light and shadow 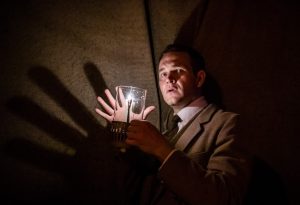 Daniel Easton in The Woman in Black

Adapted by Stephen Mallatratt and directed by Robin Herford, Susan Hill’s 1983 ghost story The Woman in Black creeps the boards at York Theatre Royal, in a production first seen at the Stephen Joseph Theatre in Hill’s home town of Scarborough.

Inspired by traditional Gothic novels, the story centres retired solicitor Arthur Kipps (Robert Goodale), who after much repression wishes to recount his own true ghost story. In Mallatratt’s script, Kipps has enlisted the help of an actor (Daniel Easton) in order to tell it; his trepidation in revisiting the events mostly to do with his discomfort in acting. The framing is an odd one, requiring more suspension of disbelief perhaps than the original, and adding scenes that break from the action to reassert the nature of it being a rehearsal, which goes on a bit too long and renders the detail in large swathes of the storytelling lost in the fog.

Billed as a ‘nerve-shredding’ experience, this particular version is campy and melodramatic at some points and very relaxed at others. There is little pleasure to be had in watching a scene not ready to be put before an audience, as The Actor purports, and the ‘rehearsal’ sections here can certainly be abridged – although the first hints of tongue-in-cheek meta-theatricality do seem to please the small army of school parties present.

All this is not to overshadow the undeniable enjoyment of the show – though the pacing needs tightening, there are isolated moments of dynamism and precision from the cast, and certain sequences do effect brilliant levels of chilling suspension. The real thrills come from the stage design (Michael Holt) and lighting (Kevin Sleep). Utilising an electrifying array of shades, strengths and shapes, the storytelling is guided carefully and mischievously by torches, lamps, gigantic moonlit windows and cleverly-aimed shadows projecting the two performers’ movements high against the dust-sheet muslin backing. The beach scene that fills the auditorium with fog, rousing suspicion of what it is hiding, is a treat, and young Kipps’ cautious search of the house in the night is thrilling.

Starting out as a plea to use your imagination and to embrace a love for the allowances of theatre and “recorded sound”, the production excels most when it becomes a silent witness to the wonder of the technical tricks; toying with expectations of the space and what should be coming next, and from where. What gets through of the story is that Alice Drablow, whose funeral Kipps is sent to by his boss, is a soul at unrest who haunts those about to lose a child.

The show wraps up neatly with a predictable but delectable twist; that The Actor’s repeated compliments on Kipps’ stage feat of enlisting a surprise actress to play The Woman are misguided, and the figure has appeared to him without human intervention several times before he returns home to his young son.