Nigel Slater’s Toast: a sweet treat to pass along 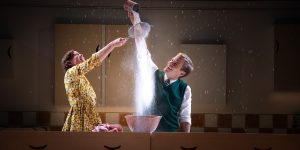 From making the perfect sherry trifle, waging war over cakes through to the gender politics of sweets and the rigid rules of restaurant dining, Nigel Slater’s Toast is a moving and evocative tale of love, loss and… toast.

PW Productions and Karl Sydow present a The Lowry production, a new play written by Henry Filloux-Bennett and directed by Jonnie Riordan, based on food writer Nigel Slater’s award-winning autobiography.

Vividly recreating suburban England in the 1960s, his childhood is told through the tastes and smells he grew up with and the audience is enveloped by the evocative sights and sounds of cookery that defined the definitive moments of his youth.

Playing the much-loved and revered Slater is Giles Cooper (This House, People and After the Dance; National Theatre), joined by Blair Plant (Blithe Spirit, Wars of the Roses, Madness of King George III) as his father, Katy Federman as his mother, Samantha Hopkins as Joan the manipulative stepmother and Stefan Edwards as Josh the inappropriate gardener. The cast are brilliant across the board, Hopkins and Edwards standing out in comedic cameos and the family trio serving up the pathos.

The smell of ever-so-slightly burnt toast fills the auditorium as you enter, immediately setting the tone for an evening of fond, warm reminiscence with a touch of pain and regret. Libby Watson’s stage design recreates a clean model kitchen with an AGA and moveable islands that lithely swim through the transitions with the cast atop them; cooking, dancing and narrating. Alexandra Faye Braithwaite’s sound design and composition accentuates the action nicely with a light-hearted pop playlist, including tunes like Psycho Killer, Alone Again and Blue Velvet.

While the purity of heart at the centre of Slater’s writing forms the body of the show, his memories are peppered with magic realist dance, advert and game show sequences, providing a gentle rosy tint to his childhood. His aching love for his mother and commanded fear of his father create a palpable yearning in the audience for this sincere young boy growing up with a passion for food. Some now-standard theatre tricks make it a cute, quirky experience that leaves you full; cast entering through the fridge, handing out pick-and-mix sweet bags during the show, a gentle ribbing at the performative ease of cookery shows with tongue-in-cheek sleight of hand.

“Joan’s lemon meringue pie is a brutal, blatant act of war, and one of the best things I’ve ever put in my mouth.”

Among the natural comedy, excitability and wonder are ever-present threads of tragedy, culminating in the early deaths of Nigel’s parents. On hearing he has lost his father, he immediately ages signifcantly, Cooper’s posture and expression dropping into a sense of lonely, determined independence. As the room slowly fills with the scent of fresh frying mushrooms, Cooper cooking live in concentrated silence, the sudden absence of his mother’s unconditional love and his father’s identity policing are allowed time to marinate, making for a very moving denouement, before a triumphant closing scene sees Nigel moving to London with little to his name and blagging a kitchen job from the alley of the Savoy.

Cooked to taste for the senses and the heartstrings, this is a beautiful show for generations to talk about over dinner, whether your own culinary efforts are disastrously experimental or timelessly comforting.