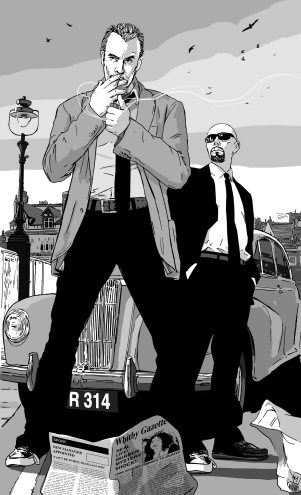 The world of comic books is certainly an area of intrigue, particularly with the amount of films based on Marvel that Hollywood have been spewing out of late. Yet Vincent Danks and Roger Gibson are a pair of York based comic book writers who have taken the genre and given it a twist that they say is sure to sell.

They have already turned the heads of publishers, with Titan books selling two volumes of their detective graphic novels, Harker, and set to release their next series called Gravestown.

Vince and Rog began writing the former when Vince suggested that a detective series would work well in graphic novel form. The story follows two detectives, Harker and Sergeant Critchley as they solve mysteries in London, Whitby and New York.

Indeed, Harker is what got them discovered by Titan. Rog wrote the comics while Vince drew them. After self publishing a number of issues, Harker was discovered by an employee at Titan who passed the idea to their superiors.

Since then, Rog and Vince have seen copies of their own work on sale in major book shops including W H Smiths and Waterstones.

How to make money as an artist

For most creative people, it is a dream to be able to take the art form that they love and to be able to make money out of it. However, how to go about this is often where people fall back. Yet Vince and Rog seem to have found an answer to this question.

Behind the scenes of Harker

“I think you have to be realistic. If you want to be an artist or a creator of any sort then you have to make money doing it. You either have a job and do it on the side, or you can actually make a profession out of it. And to make a profession out of it you have got to do stuff that will sell to a wide audience along with the more quirky personal projects. If you can balance both then that’s great,” was Rog’s advice.

Rog already has a project of his own that perhaps could be classed under the idea of ‘quirky side project’. He runs his own webcomic, called Mad Girl, which he describes as “a big daft science fiction secret agent comedy with smut.”

The character of Mad Girl is someone he has had in mind for years, yet Rog was inspired by the emergence of digital comics over recent years. He says that this venture is a fun means of doing what he enjoys without having to wait on publishers or editors to distribute the comic.

“Web comics are very popular these days because they are free and a lot of people are enjoying them. And I thought well I could do that and I’d never make a penny out of it but it’s fun.”

From crime to horror

Vince and Rog are due to publish the third in their series of Harker in due time. Meanwhile, they are also working their a horror series, Gravestown. It centres around a young girl in a strange environment and how she deals with her new surroundings. This was an idea that Rog came up with two decades ago when developing a role playing game. 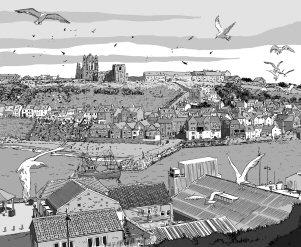 Whitby was the setting for the second volume of Harker. (image courtesy of Vincent Danks)

They say that Gravestown and Harker are great ideas for ensuring they gain commercial success. Vince and Rog describe Harker as their “detective TV series” – and say that they hope it gets turned into one – while Gravestown is their “epic movie” and Mad Girl is their “big sci fi adventure”.

Other commercial successes they have had include when Vince got to draw comic strips of Torchwood and Dr Who.

Their answer to how they feel about this commercial ventures is simple. Rog says “it’s better to be a writer and writing something and making money out of it and earning a living,”