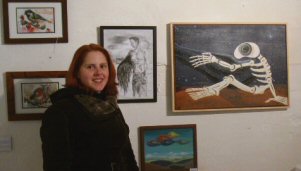 Elise is a resident artist at the studio Rogues Atelier.

Among artists, writers and other creative people, the question hangs as to what is more important: the creator’s vision or the spectator’s idea? For Elise Bikker, it seems there is much to be said for the latter.

Indeed, working as a teacher of oil painting and an exhibiting artist based in the studio Rogues Atelier, Elise has been able to take a look at this argument from both sides.

As a teacher, she believes that aspiring artists should be encouraged to take inspiration from wherever is right for them. Yet as an artist, she feels it is important to allow others to see her work as they wish. This was an issue that she struggled with somewhat when she began exhibiting.

“You put your heart and soul into [your art] so if people criticise it you feel like they are saying something personal about you but I have managed to see it sort of as a separate thing now. It’s absolutely alright because everyone interprets things differently,” she says. 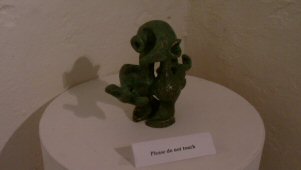 This bronze statue is built from the idea that “nothing comes for free”.

For those who are interested in what Elise does, she enjoys the chance to hear the way that they interpret her work: “It’s nice if people like what you do because it starts a conversation about something interesting”

These are points that she tries to remember when she is leading oil painting classes. Elise asks her students to bring items that they find interesting to paint in still life classes. Before beginning teaching, she talks to them about their inspiration and what they hope to achieve. She feels that it is important to take personal ambition into account as well as different interests relating to colour, technique and shape.

She says that although she teaches students her own techniques, they will almost always come out with something somewhat divergent.

Elise in York
Originally from the Netherlands, Elise moved to York to study a Masters degree. Here she moved into Rogues Atelier and says she is planning to stay in the city for some time yet.

“I try to not so much teach them how you should paint because everyone’s style and intentions are different so I try to teach them different techniques that they could use within their own imaginative spaces.”

Using the same ideas but with different results

The idea of taking similar ideas and showing them in different ways is something that she has noticed when exhibiting at such art shows as Antennae of Inspiration and Feathers of Inspiration, which were run at Rogues Atelier. 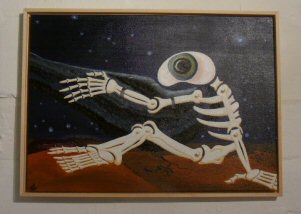 This oil painting was based off the story of Icarus. Elise says that the idea behind it is “don’t try to be more than what you are”.

She says that it is interesting that the contributing artists are all inspired by similar things but come up with varied ideas. It is also an opportunity to think of new things to paint or make.

This was proven in her exhibited works at Feathers of Inspiration. Her work contained bird like creatures, as was the theme for the art show, but her art contained the overriding theme of ‘figures of speech’.

For example, she had a bronze bird man with one arm in front of him and one behind his back, which she said came from the idea that “nothing comes for free”.

Additionally, she had a blue oil painting of what appeared to be a skeleton bird. She explained this was based on the story of Icarus, with the skeleton being representative of when he fell from the sky.

Whether or not these connections are made might be OK by Elise. After all, she says “It’s not about the object but about the discussion.”