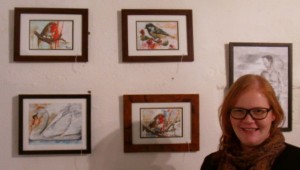 “Just talking to people about your work, it reminds you why you do it.” – Pauline

Pauline Carney is a watercolour painter, mixed media artist and curator who has run art shows both in York and further afield.

As well as showcasing her own mixed media works, which are heavily influenced by nature, she has managed to track down a number of talented contributors to her art shows. Those in York may have seen her nature-based exhibitions, including the Bird Art Show. Beyond that, she also takes part in the Tattoo Tea Party in Manchester.

Pauline got talking to Arts York at the Bird Art Show about how her exhibitions have been bringing artists together and why they are inspiring to her. She also revealed a little about her techniques for creating art; mixing print, textiles and paint.

Q. You’re particularly watercolour based, is that correct?

A. Yeah, watercolour, mixed media, kind of textiles depending on what I’m actually working on, what the theme is. I quite like using a lot of text-based things as well so it will end up being mixed media with kind of fragments of text running through it and kind of layering up with the watercolours on top of that.

I use newsprint quite a lot and found materials to give me a textured base, then I like to work over it with the watercolours and then maybe with the fine liner as well just to bring out detail. But I like them being quite organic so the watercolour; I let it run, I let it do its thing and kind of work with the medium. It’s very loose and it’s quite expressive by it’s nature really. It’s water-based: let it do what water does, it just flows wherever it wants. I think it’s very important to work with the medium rather than against it.

Q. Do you have any influences?

A. I suppose it’s just natural based influences so it’s actually nature itself and anything else that’s expressive. It might not be the same sort of style artwork. It might not be watercolour although I do enjoy it. It could be some music, just anything that someone’s kind of explained themselves in a creative way and they’ve expressed something that they wanted to get across, like a feeling.

Q. You say you come away from art shows with inspiration. Why?

A. It’s just the fact that we’re all in the same room, we’re all talking about our work and we’ve got our sketchbooks out. Just talking to people about your work, it reminds you why you do it. So it’s quite invigorating really and quite inspiring just to see that people do enjoy what they do; how you’re known. You see more visual things as well so you think “oh yeah, I really like doing that, I want to do more inspired by that”.

The last one was insect based but because we were talking about it, and we were saying what we liked, we decided to do the bird one. We all quite enjoy doing birds and it was a good starting point. At the next one we might do reptiles or something like that because we’ve been talking about it, so yeah they’re definitely inspiring and we kind of bounce ideas off one another.

Q. Do you generally try to stick to nature based exhibitions?

A. I personally do but it’s because I enjoy it. It’s not exclusive, if we see something and we quite enjoy it, whatever it is, we’ll do it. It’s personal taste with that really and a lot of mine I do tend to draw inspiration from nature, like flowers and things like that but it’s just what I’m personally interested in. I quite like abstract as well but that could go any number of directions. It may be something I’d be interested in doing in the future.

Q. What is it about nature in particular that you’re interested in?

A. I think it’s just with me using watercolour and it being quite expressive and kind of organic, that’s probably the reason why. Everything that I draw influence from, it’s not got harsh angles and it’s not aggressive like a cityscape or like something man made. It’s quite flowing and I suppose for me it’s more pleasing to the eye as well.

I quite like textures as well and that’s something that’s just abundant in nature; the different textures you’ve got and the contrasts of colours and all that sort of thing I just quite like.

Q. You said you do textiles as well, how do you incorporate that with nature?

A. It’s kind of from the sketchbook process, I’m used to not just working on a blank piece of paper. I have to layer up something first so it’s a case of making your own handmade paper or using materials like textile scraps and then layering up my text and things like that. I think it’s just a more interesting surface to start from really.

My background is textile-y as well so when I did fine art at degree I also did textiles and print making.

I like to work on something that’s got a bit of texture to it. I use a lot of stitches; I’ll stitch into it instead of drawing with a pencil. I like to create something with a bit more interest so I maybe use the sewing machine or scratch into surfaces. Just all a bit more textural and again natural I suppose, quite organically producing something.

Q. How did you end up curating?

A. It probably started just needing motivation to create my own work, so I needed to set myself a deadline. I struggle with that if I’m just working for myself but if I’m working with a group of other artists, we’ve got a deadline and I have to bring everything together and curate, it helps. It’s a driving force.

Like we said before it’s inspiring so once I did one, realised how much benefit there is just to kind of show other people’s work as well as mine, then they just started from there really. And of course, with the amount of people that you get coming through, you will get other artists. We’ve talked and we’re going “oh well, you know, I’m really inspired by this so I want to do this for the next exhibition”. They’re interested in it so you end up getting more artists and slowly building up this network.

Q. How long have you been working with these artists?

A. I suppose longest is back from college days so really a good ten years. But I started my degree in 2003 so from then on I’ve been slowly generating friends that are also artists, and also York-based artists, but it’s only with the past couple of years that we’ve really stepped up the exhibitions.

It’s something that I’d quite like to maintain and try and do an event a month. I try and give myself a personal deadline a month and just recently it’s been an exhibition.

It just helps you for motivation, otherwise I’d quite happily potter around with little paintings that I’m working on and a few little bits of different projects and never really get anything finished because I actually enjoy the sketchbook work.

I think it’s important, like the thought process that you’re putting down in a sketchbook, I love that. But it’s nice to kind of understand taking it to a final piece and then putting it out there, putting a price on it and framing it.

Q. Are you still open to having more artists joining your exhibitions?

A. Yeah. It’s always like that. I like them to be quite flexible. We’re not like a set, or an exclusive group. I’d encourage people to approach because a lot of the time it depends on your subject, I mean birds might not suit everyone but the next one might.

I’d much rather get someone in that’s really passionate about what it is they’re doing at that particular time and then maybe they’ll miss the next one but they’ll be in the next one. It doesn’t matter really, obviously everyone has got personal commitments too and I’m quite open to just receiving submissions and talking about it, getting inspired by it and seeing where it goes from there.

We do have a few artists that we obviously always work together because we’re quite close friends anyway.

I like it that it’s York-based as well but we’re never exclusively York-based. In this one we’ve got Scottish people and we’ve got people from back home, people from County Durham.