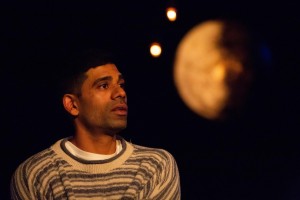 “I bet when they get older they’re going to look back on tonight and say, that was a night that was, by that fire, that was a night.” Spanning half a lifetime, Daniel Kanaber’s new play Under Three Moons takes place on three nights across three decades of two friends’ lives. Through the lense of a friendship undergoing multiple comings of age, this succinct fringe script explores how men relate to each other today. From a school trip to France as teenagers, to a surf shack in their twenties, to Christmas in their thirties, Mike and Paul meet up and talk into the night. From boyhood to manhood to fatherhood, these are the nights they share.

York Theatre Royal Studio is bedecked with a simple but evocative set by Katie Scott; a circular wooden platform sits bare under a framework draped in warm, dim bulbs hanging at various lengths like stars (designed by Lou Anderson), while closeby a hanging moon keeps watch over the two friends. Soft music composed by Chris Hope and sound by Chris James support the action subtly to add to the nurturing aesthetic and energy that reaches to the outer spaces of this production, directed by Adam Quayle.

Michael (Kyle Rowe) and Paul (Darren Kuppan) follow in shortly after the audience, trekking to their camping spot to stake (or air) their beds for Act One: Crescent. The play is meticulously structured, a ritual spell meditating on and setting intentions for modern male friendship and expression. We begin in 1999, on a cold and windy hillside, where two seemingly unlikely souls are suspended in time together. Following a ‘joke’ that leaves Paul nervous and defensive, Mike persists in his attempts to break through the ice and become closer with him. The performances are so intelligently and precisely crafted that, through this clipped but poignant dialogue, their unique dynamic quickly becomes of great importance. Mike’s approach to building care and trust between them is of such genuine, tender feeling devoid of ego that minor misgivings fall fast by the wayside. Willingly handing over his jumper, to a boy he seemed to be on opposing sides of the social playing field with, establishes their relatively peaceful relationship early on.

Paul’s internal struggles appear more complicated than Mike’s relaxed self-acceptance at this stage in his life, giving the latter a chance to display some of his more loving qualities while Paul is in need of protection. It is no small step for mankind that these two teenage boys in 1999 can negotiate emotional consent in their banter; indeed the two men go on to provide multiple models of expression and support that could greatly benefit friends across all walks of life, and particularly for men, now. Each scene takes place in secular bubbles of private time in which they are alone within a vast, breathing universe. Taking time out from the ever-increasing bustle, they give their relationship breathing room, and it gives them multitudes of strength.

Act Two: the hanging moon spins to a state of Harvest to witness a sealing of intent, ten years later in a rogue remote beach hut hideaway, in which Mike edges at doubt around his romantic relationship and Paul barely controls his drug- and family-related anxiety. Pondering their identities and paths, the two maintain their unique blend of physical detachment and incredible intellectual intimacy. They exist within their own parallel spaces, occasionally reaching out and brushing hands. Kanaber’s acute observational crafting of two such different yet compatible souls is moving on its own, but with the tiniest of glances and shifts in the actors it is an emotional undoing. As Mike jumps into the sea on his own while Paul contemplates back in the hut, the fragility of bodies is summoned to mind in Mike’s struggle for breath and control of his limbs against the cold. With considered Movement Direction from Luke Rigg, the sequence is highly affecting and vulnerable.

Act Three: Apogee and Perigee places the pair at their farthest and closest points of orbit. Paul, returning home from running a successful business in America, crashes Michael’s Christmas family home, much to their mutual relief and trepidation. Ever protective and realistic, Michael provides a makeshift bed for them both, deflecting Paul’s repeated requests to meet Michael’s young son. Gradually, Michael melts Paul’s barriers again, making himself available for reconciliation at a pace that works for them both. The patience, commitment and readiness to forgive shown by the two is unlike most relationships being written in our age. Rowe’s delivery of a later speech on his mental health following the birth of his son is particularly sensitive; an opening for vital conversations. They do wrestle, but it’s over Michael’s paternal concern for Paul’s health, and shortly afterwards they are at ease in each other’s company again, settling down to a soft light that Michael has made with love, the reach of the stars underneath them fading last.

Under Three Moons played at York Theatre Royal on Tuesday 22 October 2019, and continues on a UK tour; tickets and further information available here.