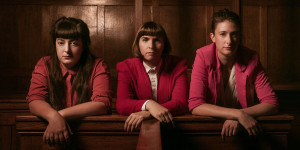 Directed by Billy Barrett with set by Luke W. Robson, costume by Kitty Hawkins and lighting by Lucy Adams, the show mixes razor-sharp reimagined court scenes with blistering modern femme punk rock and atmospheric recreations and analysis of Gentileschi’s works, framed with knowing looks and direct address. Blending myth, history and contemporary commentary, this is the story of how a woman took revenge through her art to become one of the most successful painters of her generation.

Kathryn Bond, Sophie Steer and Ellice Stevens carry the action deftly between them, assuming the judges, Tassi, Gentileschi and her father’s tenant Tuzia. Scenes, characters and narrative gears switch quickly, transitions seamless and punchy, the revelations weightily familiar. Steer in particular portrays a cuttingly recognisable figure in Tassi, barely distinguishable from the public responses of Kavanagh and Trump to the allegations directed against them, while maintaining a frightening air of arrogant cunning and convincing charm about Tassi’s manipulation of the courtroom. While Tassi is the accused, Gentileschi and her sexual reputation are really on trial – she is subjected to a virginity test and the slanderous comments of her neighbours. Tortured by thumbscrews, she refuses to retract her testimony, shouting over and over again, “It’s true, it’s true, it’s true”.

In a harrowing scene in which a judge strips her naked ready for the interrogation and abruptly walks out during this ‘verification of testimony’, Artemisia is left alone on stage with her rapist, her hands clamped in a bucket and her clothes strewn out of reach. True to form, Tassi takes advantage of the moment to further patronise and humiliate her, sliding quickly from demonstrative nurturing to sneering insult.

These teeth-grinding scenes are interspersed with escapist digressions that range from the light-hearted to the ferally gratifying; Artemisia (Stevens) educating the jury (audience) on how precisely Tassi’s behaviour and the testimony of his enablers is violently false and wilfully self-deceiving. When the question of Artemisia’s art inspired by the attack is raised, she is interrupted for factual description but detaches from the cold, procedural environment she is in and leads on with an emotive, evocative landscape of the painting, before getting to: “And there’s blood pouring out of this man’s throat. Because these two women are beheading him – did I not mention that?”

Though the subject matter and circumstances are horrifying, the play is executed with an expert balance of sensitivity and candour. Speaking of which, it is ultimately satisfying to watch our heroine who has been denied justice by society take her vengeance through art, live, in a fairy-godmother daydream of Judith slaying Holofernes, in which Stevens and Steer don those famous primary colour period dresses to behead the helpless Bond. Realising the most felicitous of visual symbolism, Artemisia’s mangled hands emerge from the ‘thumbscrews’ curled and dripping with gold paint, stunningly illuminated in dim light.

Flamboyantly austere and meditatively thorough, this is an intoxicating and exhilarating piece of theatre vital for our time, all too discernible in its depiction of the pursuit of justice for survivors, now, and for the last four hundred years.