Monster Makers: “give ’em something that they won’t expect” 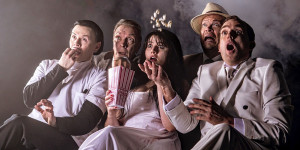 Stephen Dolginoff (Thrill Me: The Leopold and Loeb Story) serves up a jolly, camp romp in his new triple-feature musical Monster Makers, which celebrates the colourful talents behind the most (in)famous classic horror films.

Act One: Out For Blood

Andrew Isherwood plays German director F. W. Murnau, consumed with his vision and attempting to deflect a lawsuit by the estate of Bram Stoker (in the forbidding form of his widow Florence, played by Emma Louise Dickinson) over his 1920s silent vampire film Dracula – ahem – Nosferatu. Enlisting the aid of his producer Albin Grau (Alan Park) and his leading man Max Schrek (Tony Froud), Murnau tries everything he can think of in order to get the film through the courts and seen by audiences wherever possible, even if that’s not on home turf.

It’s 1930s Hollywood – keep up, dear – and legendary make up artist Jack Pierce (Darren Lumby) is lord of the lab, an experimental perfectionist with his own creative ideas at war with the restrictions of the studio on the landmark production of Frankenstein. Pierce sings to Boris Karloff (Froud) as he dabs and paints, of his ambition and longing for the credit he deserves.

“I don’t wish to conform, I want to take the world by storm.”

Act Three: The Final Nail in the Coffin

On to 1970s England – we’re on a schedule, love – and king of Hammer Films, Peter Cushing (Froud – who else?), is attempting to finish work on the final sequels to Frankenstein and Dracula – simultaneously. At the mercy of the all-business studio and their sponsors, the action is slap-dash but the spirits are high. Dickinson’s Vera West serenades Cushing with a sweet number on how she’s a Horror Fan, giving him just the jolt he needs to remember why he got into the business in the first place and rescue his final scene.

Much like Thrill Me, Dolginoff’s new musical is packed with cheeky humour, simply effective piano ballads with unpredictable melodies and characters full of passion in stories from the obscure corners of society. Perfect for old-time horror fans, this show uplifts the subversive and the curbed, telling stories you won’t hear elsewhere. Pick Me Up are the only vehicle for such a script, with their playful, innovative approach to theatre and their beautifully executed staging (Robert Readman).

Directed by Mark Hird with musical direction by Sam Johnson, the cast are outstanding and the roles just right for them, making for a tight ensemble and an uproariously entertaining evening. Lumby’s Dracula stuntman is a particular delight, and Isherwood opens the night with a brilliantly fame-hungry Murnau. Becoming all the monsters and the makers between them, they engage some wonderful and impressively subtle character differentiations even in this show that plays with the energy of spoof.