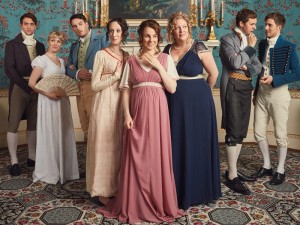 A lithe ensemble cast consisting of comedy stars one can readily summon on YouTube takes the stage at the Grand Opera House York to present the West End smash hit improvised “lost Jane Austen novel” in Austentatious, as part of the Great Yorkshire Fringe.

Amy Cooke-Hodgson (The Last 5 Years; tick..tick..BOOM!), Cariad Lloyd (Toast of London; Inside No. 9), Lauren Shearing (Showstoppers), Daniel Nils Roberts (Racing Minds, Impromptu Shakespeare), Joseph Morpurgo (Drunk History; Soothing Sounds for Baby) and Andrew Hunter Murray (QI; No Such Thing As A Fish) create a concise cast of characters one might find in any of Austen’s “rather samey” stories.

The tone is set from the audience’s entry, with Dylan Townley playing serenely on the piano and the Front of House team handing out Penguin-Vintage-style book cover flyers with space for you to write in your own title of a forgotten Austen novel. An ‘Austen scholar’ greets you with a round-up of the author’s many accomplishments, notably the invention of the Macarena. A few forgotten title suggestions are shouted out and deftly summarised before the compere accepts the challenge of ACU: Austen Cinematic Universe, where we lay our scene.

The story, such as it is: Prolific playwright Miss Johnson (Cooke-Hodgson) and her friends prepare ‘cinematic buns’ (“The black and white ones are over there…” / “I’ll move them very gently and silently.”) for the premiere of her twentieth play, which all assembled can agree is pretty dreadful (or, in the words of the critic Peter Kermode, “a leaning tower of Pisa of turd, on turd, on turd”), despite the angry purple man, the very angry green man, the tree and the incomparable CGI. Mutually friend-zoned love interest Gregory Peck (Roberts), scheming, misogynist Kermode (Morpurgo) and affable darling Mr. Jenkins (Murray) serve the plot that revolves around Miss Johnson’s journey of self-actualisation culminating in a very consensual, voluntary marriage, moments after escaping a very much non-consensual, blackmailed one.

The improv chops show more strongly among the women, who carry the second half to its righteous conclusion following some punchline-forcing showiness in the first that spotlights the team players and the writers among them. While Murray’s perpetually amused, gently accepting characters do nothing but say yes to his fellow suggesters, Roberts does a notable amount of rejecting and rebooting of scene ideas, while Morpurgo appears to be writing self-indulgent diary entries as he speaks. Lest we forget, “One man’s style must not be the rule of another’s.” This is, of course, all in keeping with their assumed characters, and the show is received with raucous laughter and applause throughout.

The Marvel movie references get slightly repetitive without developing the scenes, but graceful transitions by the unphased cast enable hilarious voice-over-narrated letters from characters just off stage as well as adept improv sidesteps such as Cooke-Hodgson’s “I shall continue my painting on this side,” after a misinterpreted mime brings her a glass of water in response to her ‘ringing a bell’. Complete with impressive monkey-wrangling, a wife-bride service-ceremony wedding-wedding, inspiring drop-ins from a covert Frida Kahlo spiritual guide (whose fan-monobrow puppeteering provides delightfully mischievous play between the actors) and less appealing ones from the likes of Fetid Margaret and Crabby Pat, Austentatious is sure to tickle the masses. How quickly will come the reasons for approving what you like.

One Response to Austentatious: a folly universally acknowledged