Sage Francis and B. Dolan do spoken word in York 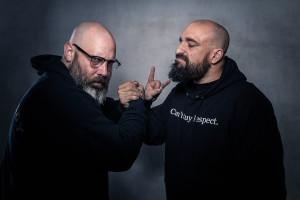 Sage Francis and B Dolan are on tour together (photo by A D Zyne).

American rappers and award-winning poets, Sage Francis and B. Dolan, are taking their Epic Beard Men tour to York.

Together, the underground hip hop legends, hailing from Providence, Rhode Island, USA, will be performing a 90-minute set that mixes spoken word, music, storytelling, comedy and more at the Crescent Community Venue.

Through a collaboration between York’s own slam poetry promoters Say Owt and England’s leading performance poetry organisation Apples and Snakes, Sage Francis and B. Dolan have added the city to their European tour. York’s leading punk poet Henry Raby will also be performing some of his work on the night.

Sage Francis and B. Dolan, known together as Epic Beard Men, previously performed at Edinburgh Fringe Festival. Earlier this year, they took their Tricknology show to the festival, where they performed 21 sessions.

They are currently on tour across Europe, having performed in Sweden, Germany, Norway and Estonia. As rappers and poets, both together and individually, they have toured all over the world.

Sage Francis and B Dolan perform at the Crescent Community Venue on 22nd October. Tickets are available from Eventbrite.