Turn of the Screw: delusions of intent 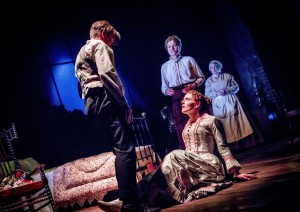 Henry James’s classic ghost story is adapted into a compact two-hour stage play by Tim Luscombe and directed by Daniel Buckroyd, with design by Sara Perks.

The Governess (Janet Dibley, Jackie the Musical) makes her way to a physically slanted Bly in 1840 following her meeting with the master, with all the worrying haste of the original, though with less obviously beguiling cause. His orphaned niece Flora and nephew Miles (Amy Dunn and Elliot Burton) resemble the sophisticated, spritely children of the novella in their apparently idyllic estate, and later double as the haunting spectres of now-dead, disgraced ex-employees Miss Jessel and Peter Quint. The cast also features Maggie McCarthy as the unwittingly complicit Mrs Grose, last seen at York Theatre Royal in Sandi Toksvig’s comedy Silver Lining.

The campfire storytelling framework of the novel is switched here for a conceit that promises interesting development for Flora but rather breaks the tension in the Governess’s character; years after the fateful events at Bly, Flora tricks the Governess into an interview in order to reveal the truth of the past and her brother’s untimely death. The Governess is compelled to account for her motives and actions at the time, while Flora presses to illuminate every corner of her testimony. While this leans toward satisfying a modern urge for justice and reporting in childcare, it gives too much voice to a character without anything left to say. Hearing of the Governess’s “unsophisticated” past and previous breakdown immediately dilutes her perspective and thus any doubt as to the root of the horror. Other potent moments of nuance such as Mrs Grose’s pained admission of illiteracy are also buried.

Indeed, the script is full of expositional reminders that the story is being recounted in flashback, somehow filling an otherwise quiet, atmospheric tale with what equates to diffusive noise. Elements of various artistic intentions tiptoe around one another without fully committing, except for the one duality more powerful when left undecided. There is no ambiguity about the actuality of this Bly; the Governess is very clearly posited as the one who is “bad” and “lost”, summoning a weak fantasy and undertaking such a possessive maternal obsession on the children and the household that it ultimately and very tangibly kills her favourite innocent charge.

“A sad spinster, emerged from the shell of a desperate virgin.”

The interactions between the Governess and children are the meat of the discomfort in this version, Miles engaging in overtly sexualised behaviour with both his sister and his guardian, and the Governess repeatedly failing to maintain appropriate boundaries in her care of them. The love language is overwrought to say the least, although in the original this has its place in a timely sincerity, while on stage today it is laced with suggestion, especially while all but one of the cast seem to be playing out of realistic age range throughout. Most chilling here are not the unconvincing possibilities of the supernatural but the systematic structures of abuse.

“Whatever I did, you did more.”

Victims are painted as wicked and possessed or angelic and tragic, as suits their abuser’s rationale for her behaviour. They are gradually shut off from the outside world and all networks of safety, from each other. She lies to them and prevents their correspondence with their uncle. Miles’s company is likened to that of a new husband when he is kept alone with her. She begins to allow him unusual free rein when shame at her smothering displeasing him creeps in. She continues to excuse her negligence and overbearing by attributing premature agency to the children, visibly confuted by the present Flora, watching the tale unfold with horror. It raises questions of the original protagonist that may not have been considered to this depth – is her testimony in any way reliable? Did the master truly ask never to be troubled, or indeed even meet the woman at all?

The action is perhaps both too cautious and too bold in its decisions, mingling hints at Victorian melodrama and over-familiar, un-Victorian physicality with a strange hesitation unable to serve either, placing what danger one grasps to glean in the insidious hoarding and abuse of trust rather than the imagined immediate threat. John Chambers’ score is apt but for inapposite animalistic screeches and relentless, misjudged grand piano drops as subtle as allusions to Flora’s ‘screwing in’ the mast of her boat, but David W. Kidd’s lighting is genuinely exciting, at times evocative of German Expressionism. This melee of ingredients creates a sense of delusion akin to the Governess’s wilful departure from rationality, though unfortunately exposing the production itself in its graceless foggy spotlight.