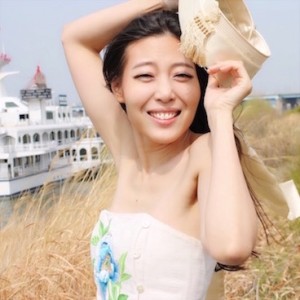 Love Deadline (Desdemona) is a gorgeous one-woman show performed in English by Korean actress Ji Young Choi. Its minimal, elegant aesthetic accompanies a strongly evocative performance which tackles domestic violence, the changeability of love relationships and the sacrifices one is prepared to make for love.

Desdemona is the daughter of a Korean general. The audience is first introduced to her while she is making tea: with the slow, respectful movements one reserves to an important ritual, she handles the various pieces of her tea set and smiles while watching the water fill her beautiful teapot. Her dress is an elegant, light pink gown: it makes her look, together, strong and gentle, ethereal and impacting. Blue and white lighting alternates to illuminate the traditional bamboo mat that covers the floor, on which the tea set is placed in a central position. In the moments when the lights go out, the paper lantern hanging overhead keeps glowing with a faint, yellow light, not strong enough to pierce the darkness. When Young Choi first speaks, she is magnetic. She is generous with the audience, clocking eyes with them, conducting her monologue like a conversation with a silent interlocutor.

The show is a wonderful example of potent storytelling; the minimal aesthetic works perfectly when paired with Young Choi’s slow, eloquent movements which function as effectively organic companions to her words. The audience is immediately captivated by Desdemona’s story: with melancholic joy, she narrates her first encounter with her love, Othello, a foreign general come to Korea to visit her father. After an exhausting battle with her father, she is finally allowed to marry Othello and move to Sicily with him. Desdemona is over the moon: having won her father’s approval has been extremely hard, but she is now ready to relax into eternal happiness. Othello has even gifted her a room that is the perfect copy of her Korean tearoom, in case she should ever get homesick. He has given her a handkerchief as well, cut from her own wedding dress: she is to treasure it always, as a reminder of his love.

At this point, Young Choi’s face is crossed by a dark shadow. Othello has changed, she says. He has been acting increasingly strangely towards her. He has refused to greet her, spend teatime with her, kiss her. He has gone mad with rage when he learnt that Desdemona had ‘lost’ the handkerchief he had gifted her at their wedding. He has fired Cassio, a man whom he trusted. What is happening? The lighting turns a dark shade of blue and the sound of rain acts as a background to Desdemona’s words: “He has called me a whore”. Love Deadline is a valuable re-working of the Shakespearean text that brings to light the importance of listening to the voices of women throughout history. Desdemona is convinced that there must be a kind of witchcraft at work: the man who dares to call her a whore and physically abuses her “cannot be Othello!” Yet, the show follows her painful realisation that yes, the man whom she had fallen in love with and the person who is abusing her are, indeed, the very same person.

The language in the script is fully conversational, yet – like the set – it does not disdain poetic images. She cries: “If I had known that love is like the moon, that it goes from full moon to half moon to a crescent moon, then I would not have fallen in love at all.” These poetic metaphors reference Shakespeare in their contributing to turn Desdemona into a tragic heroine. Yet, the strength of the show lies in its lucidity in unmasking the reality of Othello’s abusive behaviour, which leaves permanent signs on Desdemona’s body and mind: one of the most effective scenes is a re-enactment of Desdemona’s dream of being strangled by Othello with the handkerchief that she had just managed to retrieve in one of the corners of her room. This dream, rendered through Young Choi’s smart use of physicality, is the sad foreshadowing of Desdemona’s destiny and it reminds the audience that, Iago or no Iago, domestic violence has serious consequences and it can never be excused.

The show ends with a projection of Desdemona’s heart-breaking ‘wedding film’ in which, oblivious to what the future holds, she kisses the camera wearing a traditional Korean headpiece. The performance only lasts 30 minutes, but it is a punching, sensitive meditation on domestic abuse and on the necessity of re-writing a literary canon that has been, and often still is, oblivious to women’s suffering.