Tales of Bacon: Charming and fiesty 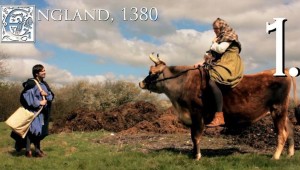 Tales of Bacon takes an old setting and gives it a new perspective.

Tales of Bacon is an original medieval comedy web series by Plotting Films, written by Natalie Roe and Max Gee, directed and produced by Natalie Roe. The pilot has now been released online, with series one pending funding.

The year is 1380: Young noblewoman Elfrida Deverwyck (Gemma Shelton) is on an adventure after running away from home and following the pilgrim trails of medieval Northern England. She is accompanied by rascally Pardoner Thaddeus Bacon, (Adam Elms) much to her annoyance, though he may prove to have his uses.

Expect medieval in-jokes, homages to folk tales, songs, historical figures known and obscure. Python meets Blackadder meets Chaucer meets Maid Marion.
Plotting Films have built an authentic world and hit the high notes of production value on a shoe-string budget, thanks to the expert cinematography of Tony Hipwell, Roe’s measured direction and the delightful performances of the leads. Research aided by York academics and museums has paid off and they’ve made something worth sitting up for – I’m sure Thaddeus and Elfrida would agree that standing would be beyond the call of duty, as you can enjoy this series from the comfort of your chambers, or your outhouse, if you’re so inclined.

This series is charming and feisty from the off, with wonderful performances all-round, big fat tongues in cheeks, and an informed, thoughtful script and production team that will delight feminists everywhere. The setting may be old but the perspective is refreshingly new. Postpone your premium blockbuster plans and enjoy this satisfying new story for free in your own home.

You can watch the pilot episode online now, here:

And if you can’t wait for more, you can back the completion of the series on their crowdfunding page here.