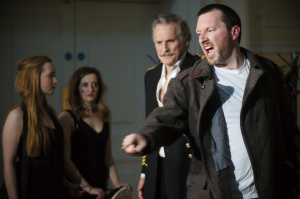 This challenging, lesser-known text of the Bard’s follows the fall of Timon (played by John Hoyland), a popular Athenian socialite whose unlimited generosity ultimately undoes him.

York Shakespeare Project and Director Ruby Clarke take on the text in an unforgiving performance space. The De Grey Ballrooms’ acoustics and seating arrangements are pretty poor, but the performance is enjoyable and winning enough to distract from these minor misgivings.

The inbuilt scenery of the ballroom is actually wonderfully fitting for the first act of the play which centres around Timon’s lavish parties. Crisp silk drapes, colourful bows and sashes, and paper birds dripping like jewels from the chandeliers provide a subtle, stylish setting for a production that brings out the tenderness and beauty of a story that is also fraught and tragic. Later these tensions are wrought out in the upturned furniture and darker fabrics that create Timon’s home in the wilderness.

Costumes are similarly reduced but garnished – household staff wear green silk waistcoats, artists don berets and lords flaunt silken sashes. The colour palette is as refined as the verse and the characters. 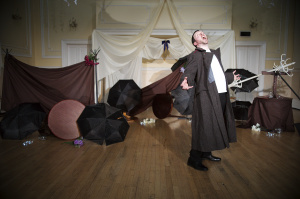 Choreographed dance and movement sequences showcase lubricated socialites, and sultry, sensual parades bring the ensemble cast together and give the show a real flavour of the focus on society, so that Timon’s break from the community is more weighty and stark.

The ensemble form a Greek chorus of distinguishable characters; in turn sleek, poised, fluid, and thoughtful. Rachel Price and Nick Jones are animated leaders of a loveable, supportive and entertaining energy that spreads throughout the cast.

Apemantus the philosopher (Cat Hall) appears in the hippy garb of 1980s white-African London, standing out from the crowd visually and vocally. An interesting choice for a fierce misanthrope. Hall’s performance is infused with knowing and spark to match.

“It grieves me to see so many dip their meat in one man’s blood.”

Shakespeare’s use of opposites

Lucy Simpson is a perfectly effusive match for the loyal steward Flavius, sharing a moving, almost romantic connection with Hoyland’s Timon and conveying a torch of her master’s old benevolence in her interactions with others. Shakespeare loved to write opposites, contrasts and complements, and Flavius is arguably a more consistent, stable version of the love and generosity that burnt too brightly in Timon. 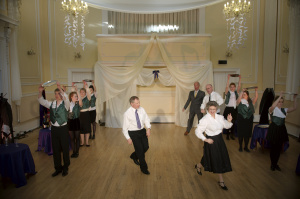 A modern selection of music accompanied the performance.

Hoyland himself brings strength, passion and warmth to both the open-hearted optimist and the wounded misanthrope that the title role contains. He expresses articulately a man in the height of blissful naivety, in a shocked rage, and in a disillusioned retirement.

A modern mix-tape of songs with disconcertingly meaningful lyrics feed these sequences with a flare of fun and thoughtfulness, including The Beatles’ ‘Money’, Simian’s ‘We Are Your Friends’ and a sedate cover of Britney Spears’ ‘Toxic’. The timeless, poignant message of the play is illuminated in this non-specific time setting apt for philosophical pondering. Clarke brings a definitively compassionate touch to this beautiful production that seeks the balance between surviving with and without others.