Behind the scenes of Hedgepig Theatre’s The Maids 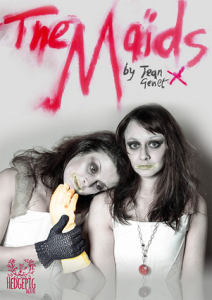 Gemma Sharp and Anna Rose James in The Maids.

Gemma Sharp and Anna Rose James are taking up the roles of murderous sisters Claire and Solange in Hedgepig Theatre’s adaptation of Jean Genet’s The Maids.

They spoke to Arts York about why they chose the play and what they have in store for when they bring it to The Fleeting Arms.

Q. What’s The Maids about and why did you choose it?

G. Two maids hate their mistress, plot to kill her and it’s all about the way they do it. It’s the games they play, the rituals, role plays and things like that. It’s very simple but very complex at the same time.
Me and Andy [Curry] started Hedgepig about four years ago and the reason was because we wanted to do the plays we wanted to do. The last big play we did was an adaptation of Playboy of the Western World. We have since had a break and had a baby and decided, with the play we come back with, we wanted to do something we really wanted to do. Something that was very very different, very small, very claustrophobic. I read The Maids at university about 14 years ago. I loved it and I’ve wanted to do it ever since. So I said to Andy “Why don’t we do The Maids? Why don’t we do The Maids with Anna?”

Q. Is it just you two in the play?

A. There’s a little cameo from the madame that they’re plotting to kill, which is really interesting because, without that scene, you wouldn’t have anything to go on but the maids’ words about her. I quite like that perspective because you can play that either way; either she’s as awful as they say or she isn’t. It’s a simple play in that the action is simple but the relationships and the routes we could take it on, because the language is so rich, is really complex and interesting.

Q. What can you tell me about the characters you’re portraying?

A. They’re kind of intertwined. Gemma is playing Solange and I’m playing Claire. The only guidance you have in the stage script is that Claire is the younger but they’re both very similar ages. In the research around the possible inspiration, we read about two sisters who murdered their mistress really violently. There was speculation about whether the older one had dominated and influenced the younger one, whether they both had a mental health issue and psychosis around the situation and the woman that they working for, or if it was led by one. In that respect, we are exploring how much is decided by each one and looking into the power play, because it does sort of shift. It’s really hard to tell, and I don’t know if I want to decide, whether the power does settle in any one place.

A. There’s a lot of emotional manipulation going on. It’s quite hard to work through that. There’s so many layers of intention in each line.

Q. Have you put your own stamp on the characters?

A. I think so. I feel like what [Gemma] has come out with so far is different to how I would play Solange. Inherently, there are going to be things that are us that are imposed on them. It’s quite a weird one because the script is quite naturalistic in that the speech jumps, they cut over each other and sometimes they talk in a quite colloquial, natural way. They say ordinary things to each other but they also say a lot of poetry and that’s completely unrealistic. It may be that they strive towards a certain poetry but you just don’t get that in real life. It’s sort of between absurd and naturalism. You can’t just approach that with “how would I be if I was in this situation?” because they don’t think logically.

Q. How did you end up working together?

G. We’ve worked together quite a few times. I first met Anna when I did a play that she co-wrote with Rocky from Six Lips called Close. For our first play we did Playhouse Creatures and Anna was the lead in that. We’ve done bits and bobs for each other over the past few years and become friends. Anna is my daughter’s godmother, so good friends, and I just thought “Who would I like to do this with? Who would I really enjoy doing this on stage with? Being so close? And who do I think would be amazing?” It was only one name, I thought it definitely had to be Anna.

Q. Why did you choose The Fleeting Arms as the venue in York?

G. We do lots of different types of performance but we’ve mainly done tours; Yorkshire tours or pub tours. It’s just pop-up theatre, you can do it anywhere in a pub, no specific setting, no need for set. Our first idea with The Maids was that. We wanted it to be the kind of play you could put in a suitcase, take out again and do anywhere. It’s more about the story and the storytelling rather than the place it’s set. We have a girl called Kelli Zezulka, who is our lighting designer. We have given her the challenge of “we want practical lights”, so just lamps that we can turn on and off. The set is just going to be stuff we can put in a bag and then take out again and put in the back of a car. So we thought The Fleeting Arms had a really nice feel about it. It’s a great space, we’ve been and had a look, the play will really go down well there and it’s just somewhere different than doing it in one of the set theatres. There’s a lot more freedom to do it there than say somewhere like Friargate or 41 Monkgate, which are both great places but we didn’t want this to be sit down theatre. We wanted this to be very relaxed.

Q. How does somewhere like The Fleeting Arms differ from other places you have performed?

A. It’s not a traditional studio or a traditional theatre. The building isn’t designed specifically for theatre so it’s different to stuff I have acted in, in that way, but it very Hedgepig-appropriate because they do a lot of pop-up and site-specific stuff.

G. I think it will draw the audience in more rather than “they’re there, we’re here.” We’ve got ideas of drawing the set on the floor and making reference to certain audience members. We want to get into the audience which, in a traditional theatre, you couldn’t really do. We want them to feel as much a part of the play as they can, although they would only be voyeurs.

Q. Is it going to be a challenge compared to the plays you have done before?

A. I think it’s always a challenge working around having a small space and all the limitation. Also, you never know who is going to be sat in each seat, so you get a different person each night and you get a different reaction if you are interacting with the audience. For me, it’s always a challenge in engaging the audience more in that way. I think that’s the point of theatre for me; it should feel like an experience that is happening now and if you are looking away, you’ll miss it. You are a vital part of it.

G. You don’t know what to expect every night. With it being such a relaxed setting, people might just shout at you and walk out, or walk in halfway-through with a drink. It’s being prepared for things you wouldn’t normally be expecting in a theatre. I think the play itself is a big challenge. I’ve never been as scared of a part as I am of playing Solange. It’s huge and it’s going to be challenging but, if it was easy, there would be no point in doing it. It’s going to be hard in a fun way, so I am really enjoying it but I am terrified.

Q. Why are you terrified?

G. I think both Claire and Solange are really complex. It would be easy to blanket play one as dominant and one as submitting but, with it being a play I love so much, I want people to love it, so I want to do it properly. With it not being a very well known play, we will be introducing it to a lot of people. They won’t know who Genet is. Being so attached to it, I want people to like it, so I feel there’s pressure on us to make the people of York like The Maids.

Q. What are your plans performing arts-wise once you have finished The Maids?

G. In 2013 we did an adaptation of August Strindberg’s Miss Julie and I sat for six months adapting it. I love Miss Julie and I always thought every performance I have seen of it never got it right. Never got the balance between hatred and love and sex and violence. So we decided to do it and I wrote it and I wrote it and I wrote it. We made it very physical and very violent and then I found out I was pregnant, so we had to take out all the physicality, all the violence. We still toured it, and it was great, but we would like to do it again, putting back in what we took out. So, we are hoping, if we can get venues, to re-tour Miss Julie in the Autumn.

The Maids is on at The Fleeting Arms in York from 4th to 6th June.