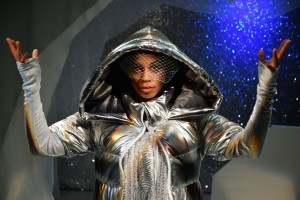 Joanne Sandi as the Snow Queen, Photo by Brian Slater

“Don’t worry, it’ll have a happy ending!” was the whispered assurance of a front row parent to their child mid-way through tutti frutti’s latest production, The Snow Queen. And it does. But not in the way you might expect.

tutti frutti aim to inspire children by exploring themes that are relevant to them in a sympathetic, accessible and humorous way. Therefore it is no wonder that Artistic Director Wendy Harris goes back time and time again to the darkly educational tales of Hans Christian Andersen for inspiration. Mike Kenny, the writer of previous Andersen adaptations for tutti frutti (The Ugly Duckling, The Princess and the Pea) heralds Anderson as “the first proper genius storyteller for children”. Despite being over 200 years old, Andersen’s stories have proved so captivating and so relevant that they have endured to delight a new generation of children today.

In contrast to the recent popular adaptation Frozen, Andersen’s version of The Snow Queen tells of an evil troll who makes a magical mirror which distorts the appearance of everything it reflects. It never reflects the good and beautiful aspects of people and things; only magnifying their bad and ugly traits. When the mirror shatters, the shards blow around the world and get caught in people’s eyes, freezing their hearts like blocks of ice and making their eyes like the troll-mirror itself, seeing only the bad and ugly in people and things.

“Sometimes our feelings can’t be felt,
A frozen heart takes time to melt.”

Kai (Mitchel Wolfe) and Gerda (Hannah Victoria) are neighbours and best friends, watched over as they play by Gerda’s grandmother (Joanne Sandi), who also doubles as the warm and reassuring narrator throughout. The children play together every summer underneath the roses on their small balcony, pointing out shapes in the clouds and dreaming up imaginative stories. They sing joyfully about how nothing changes.

But when the children see the roses die in the winter, and Gerda’s grandmother tells them about the Snow Queen… something does change.

Kenny’s carefully crafted script takes the idea of a frozen heart further: protagonist Kai is so hurt by the death of his mother that he closes off his feelings, cutting off the people who care about him and becoming destructive in the process. He becomes distant, even from Gerda. Eventually he runs away, travelling out of the city on his skateboard-toboggan tied to the back of a huge white sleigh. Outside the city, the Snow Queen reveals herself to Kai and kisses him twice: once to numb him from the cold, a second time to make him forget about Gerda and his mum. A third kiss would kill him. An audible shiver of fear passes around the audience.

Gerda is angry with Kai for leaving, but her Grandmother persuades her to find him, as he needs her help. Gerda goes on a madcap journey, meeting psychedelic flower people that try to detain her by making her dance with them, and 80s-style robbers that threaten to eat her. These distractions provide some comic relief and toe-tapping songs, but the audience is ultimately as frustrated as Gerda is in being detained on her quest. Meanwhile, Kai is set an impossible task by the Snow Queen, at the threat of a lifetime of imprisonment.

After a reformed robber girl lends her a friendly reindeer to show her the way, Gerda eventually finds Kai in the palace of the Snow Queen. He doesn’t remember her, but the warmth of Gerda’s tears melts Kai’s frozen heart.

“I couldn’t feel. It hurt so much, I missed her so badly.”

Together the children realise they are not bound by the Snow Queen’s imprisonment, as ‘nothing lasts forever.’ They make their way back home, and share memories about Kai’s mum underneath the roses.

The cast all perform with great sensitivity and assurance throughout, and the friendship between Kai and Gerda is – quite literally – heartwarming. Ivan Stott’s gorgeous score provides ample opportunity for show-stealing vocals from all three, but they work so well together that the melodies weave in and around each other to complement rather than overbear. Wolfe’s haunting falsetto harmonies complete the perfect winter soundscape, while the recorded underscore is also embedded into the action, making the simple placing of mirrored icicles magically mesmeric.

Kate Bunce’s bleak, icy, minimalist set is transformed by Mike Redley’s ingenious lighting to embody the warmth of home, family and friendship one moment, and a chilling ice palace the next.

In essence, this production is about two children finding their independence in the outside world and dealing with things they can’t change. It is so refreshing to see children’s theatre that doesn’t shy away from difficult themes. The world isn’t always full of happy endings, and productions such as this one go a long way to helping children learn how to cope with difficult feelings and events. Parents and carers: take your children to see this show, they will engage with the themes at whatever level they are ready for, and any conversations that are opened up because of it will make you and your children better, more empathetic humans.

Snow Queen is playing at York Theatre Royal until the 13th October before going on to a national tour. Find out more and get your tickets at https://www.yorktheatreroyal.co.uk/event/snow_queen.php#.W69cGq2ZOT8