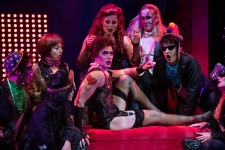 Since its first appearance at The Royal Court Theatre in June 1973, Richard O’Brien’s The Rocky Horror Show has become the world’s favourite rock ‘n’ roll musical. It has been performed worldwide in over thirty countries in every continent and has been translated into more than twenty languages. To celebrate the fortieth anniversary, Director Christopher Luscombe created a brand new production for a year-long UK National Tour. Continue reading →