The Night Watch: our quietest battles 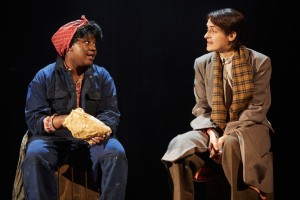 Mara Allen and Phoebe Pryce in The Night Watch, Photo by Mark Douet

One departure from the source text sees the story told completely in reverse, perhaps with the intention of closing on a poignant note of hope, as so many scripts have played with before, although the post-war sequences early in the show following the now solitary Kay (Phoebe Pryce) feel far more powerful and rich in character, and the audience would benefit from a little more trust to appreciate a quiet ending. Instead of anticipating what might come next, the story instead retreats away into the past; the why and how of the where we have just encountered.

A compact cast and crew have created a thick emotional fog surrounding Waters’ ensemble of characters, crafting meticulous backstories and expert subtlety and nuance to bring to life the most enigmatic and challenging of motivations. With deft movement direction by Lucy Cullingford, the simple web of interconnected lovers weaves beautifully through David Woodhead’s stunning set: in turns grand and overbearing, with plenty of pleasing pockets of new functionality to surprise you.

The use of the space is dream-like, flowing easily and utterly captivating, especially in Mrs Leonard’s (Izabella Urbanowicz) mystical speech from the upstairs doorway, not to mention Kay’s rescue of Helen (Florence Roberts) from the ever-encroaching piles of rubble in the Blitz. The compressed atmosphere of futility and the resulting panic of prisoners during a bombing, when Duncan and Fraser find their comfort in each other, locates the heart of the story in exactly the world that makes sense for Kay to stand in, still and stiff, a remnant of her former self.

Completing the serene haze of the design is lulling lighting by Nic Farman and soft xylophone tones in a composition by Sophie Cotton.

Malcolm James presents Mr Mundy in the intelligent way that we must examine our monsters, building on the hard, predetermined predator seen before and adding hurt, kindness, a sense of self we too readily unwrite from those who do great damage. How else are we to heal? Lewis MacKinnon’s Duncan travels through shades of delicacy and wraught discomfort, complementing James’s manifestation perfectly.

Sam Jenkins-Shaw provides great comic relief as Cole and a very genuine Fraser just heartfelt enough under a mild toffee front to eke out hope of a nurturing presence for Duncan. Mara Allen perfectly paces the audience’s willing chuckles as Mrs Alexander, while Louise Coulthard’s Viv is a more serious but just as well-balanced character on the outskirts of what seems to be the main love affair, as we begin with Kay.

Pryce is heart-wrenchingly believable as a fragile soul leftover from the war and from her relationships, and a beautiful representation of a queer character on stage, just existing in the quiet moments. What might be perceived as more triumphant moments of action, in the embraces between Roberts and Urbanowicz as Helen and Julia, actually feel rather tensely forced, and the moment doesn’t lay this tension at the feet of the air strike they are playing rookie in.

The strength of this show is its gentleness, its simplicity. While there are some scenes in which characters pounce upon each others’ lines without time for convincing emotional response, the commitment of the cast to these characters, and the creative team to the space and story, weighs nurturingly on the energy on stage as it shifts, stretching backwards through knots of pain and loss until they are undone and ready to be re-made.