Irving Undead: Resurrecting the strangest actor who ever lived 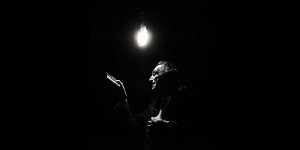 This October, deep in the chambers of York Medical Society, a meeting of two minds. Unlikely for its reach across many centuries, and yet inevitable for the kindred nature of the characters in question. If you have ever, or never, hungered to hear from the restless spirit of the father of horror, your time is come.

Henry Irving is dead. But he has more to say yet, in a new one-man play coming to York this autumn.

The man behind the man is award-winning actor-writer James Swanton, fittingly hailed as “a horror star of the future” by genre author Kim Newman. Following the success of his previous one-man plays in the West End (Sikes & Nancy) and on film (Frankenstein’s Creature), Swanton now turns his indomitable character study to “the strangest actor who ever lived”.

“I’ve been intoxicated by Irving’s life and art for the last six or seven years,” he says. “[His] best-loved parts tended to be strikingly macabre: not only his signature role of murderous Mathias in The Bells, but the Flying Dutchman, Eugene Aram, Louis XI, Richard III, Macbeth… Did I mention Mephistopheles in Faust? Given this résumé, it’s almost incomprehensible that he became so respectable a figure: a Victorian embodiment of Englishness, gentlemanliness, knightliness, scholarliness, and so forth. At heart, Irving’s art was always deeply subversive.”

Mirroring much of Irving’s acting career and even bearing a striking physical resemblance, who better to absorb his spirit than Swanton, a heartthrob of the nineteenth-century Grotesque.

Still regarded as an inspiration, and certainly the intended actor, for Bram Stoker’s Dracula, Irving never actually took up the role, though Swanton believes he “will forever have a bit of the Count’s immortality.” Fascinated by Irving’s powerful effect on those around him, the lack of documentation on his life outside his work and the untarnished respect and admiration awarded him despite many common factors with more oppressed peers, Swanton joins a harem of artists dedicated to keeping Irving alive.

“Fundamentally, Irving Undead is a play that questions whether acting is even a choice. It’s such a devastatingly trying path that it can only be some strange abnormality that causes any of us to stick at it,” Swanton says. “It’s well worth resurrecting Irving to answer such burning questions. To use the stage to bring him back to flesh-and-blood life (or undeath) is the best possible tribute to his artistic medium. A sculptor lives on in stone; a painter on canvas. But the only way an actor can be properly resurrected is through another actor.”

Embodying this Gothic master in a new one-man play of his own writing, Swanton will tell a tale of transformation, obsessive artistic devotion, doomed love. A story of a man who could never escape his monsters – even in death.

Irving Undead will play in the enigmatic chambers of York Medical Society from the 10-12 October 2019, tickets available here.