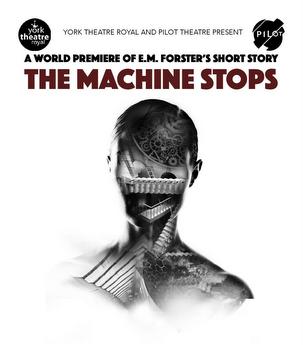 Pilot Theatre perform their adaptation of The Machine Stops.

Pilot Theatre delve into a world where humans live underground in their adaptation of E.M. Forster’s post-apocalyptic tale of human dependency upon technology, The Machine Stops.

In keeping with the theme of technological dependency, this world-premiere adaptation is itself carried by John Foxx’s transcendental composition of ’80s-reminiscent electronica. Rhys Jarman’s design is as succinct and stylish as the source material, fittingly setting the tone for a heightened world not out of place next to Berkoff’s Metamorphosis.

Humans live far underground in individual octagonal cells with nothing but a chair and a reading desk. Everything they need is summoned by buttons. They need rarely move.

Caroline Gruber plays protagonist Vashti, a comfortably active member of the Machine’s human hive. She delivers and listens to Lectures from her chair and attempts to formulate new Ideas. Karl Queensborough plays Kuno, Vashti’s radically curious son, who appears mostly through video calls in Vashti’s room. Maria Gray and Gareth Aled portray the Machine itself. These cogs act as traditional narrators despite their unnatural choreography that weaves through the set; sometimes more distracting than impressive.

There is an opportunity with Vashti and Kuno to really explore what humans living underground for a lifetime and knowing nothing else would actually look, move and sound like, which is sadly missed.

Vashti’s gradual pique of interest in the world above ground-level through Kuno’s exploits is affecting, played nicely by Gruber.

The show could benefit from some tightening and some playtime to explore deeper the poignant issues at its core.