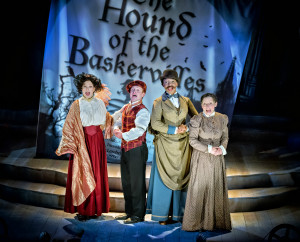 Damian Cruden’s Sherlock Holmes: The Hound of the Baskervilles is an original family-oriented devised musical dressed handsomely in an appropriated Victorian circus-theatre aesthetic, with model cityscapes, shadowplay and scrolling captions.

The pantomime banter and pandering in-jokes of traditional theatre, such as the obligatory characters running aimlessly through the audience, are tiresome and are saved only by the charm of the cast. Elexi Walker stands out as the sprightly Miss Hilda Stanley and Dr John Watson, as does Joanna Holden as the charismatic Mrs Rose Dimmell and Mrs Hudson. The Barrymores (Holden and David Leonard) are a particularly dark delight. Holmes himself (Leonard) lacks enthusiasm, which is disappointing for the globally-loved character.

An original live score by Rob Castell and the company elevates the show, although even this is held up in a painfully pointless sequence where cellist Rachel Dawson is hoisted from the stage in an aerial hoop for a short minute before returning to the ground. The applause-begging present here is the show’s most consistent irritation. In designing the show for ‘all ages’, the company has made the old mistake of believing that family-friendly means dumbed-down. The harking back to ye olde sensibilities and expectations is jolly at best and condescending at worst.

This is a show for those who like their theatre full of slapstick and distractions and don’t mind an underwhelming climax. It could be developed into a rousing musical storytelling cabaret piece if willing to shed its more forced lyrics and find a little more purpose and passion.