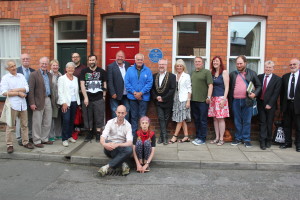 A crowd outside 53 Hartoft Street, where the Frankie Howerd memorial plaque was unveiled. (Photo by Dani Barge)

A memorial plaque to comedy legend Frankie Howerd OBE was unveiled at his first home in York.

Cultural Ambassador Mark Addy unveiled the plaque before a crowd at 53 Hartoft Street, where Mr Howerd lived for the first two and a half years of his life from 1917 to 1919.

Mr Howerd gained fame and adoration from millions of people through his appearances on the radio, stage and television and cinema screens. His best-known works include several Carry On films, The Great St Trinian’s Train Robbery and Up Pompeii. He was well-liked by the royal family, especially Queen Elizabeth the Queen Mother, and he appeared at eight Royal Variety Performances between 1950 and 1978. In 1992, he died of heart failure while still working on a series of one-man shows for Central television.

Cllr Dave Taylor, Lord Mayor of York, and York resident Andrew Collingwood originally came up with the idea to mark Mr Howerd’s birthplace in 2010. The idea was then taken to York Civic Trust, which protects and enhances the city’s architectural and cultural heritage and has put up over a hundred plaques to the people and places of York over the years. 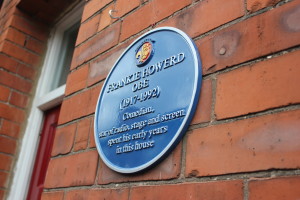 The Frankie Howerd Memorial Plaque Fund took public subscriptions for the plaque, which were later supplemented by takings from a special film screening at The Great Yorkshire Fringe 2015.

Cllr Taylor said: “I’m delighted that Martin Witts and The Great Yorkshire Fringe supported the idea of erecting a plaque to Frankie at his very first home in Fishergate. Now with Martin’s and the York Civic Trust’s generous help, we’re finally making the idea a reality.”

Mr Howerd had only one memory of living at 53 Hartoft Street, which was of falling down the stairs. After leaving York, he continued to have family holidays in the city as he still had relatives living here. In later years, he said that he had a fondness for York.

This year’s Great Yorkshire Fringe Festival is celebrating Mr Howerd’s life and career as part of The Great Northern Comedy Trail, where members of the public are voting online for their favourite comedian from the north.