The Knot of the Heart’s insight into addiction 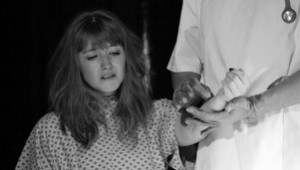 Anna Rogers as Lucy in The Knot of the Heart.

This is a play about grief, family, addiction, recovery, shame, and change, among other things.

David Eldridge’s The Knot of the Heart is an unpleasant slice of life; his leading lady Lucy a wretched character. Neither is easy to like. Lucy (played by Anna Rogers) is abrasive, selfish, ungratefully privileged and utterly graceless. Eldridge does an artful job of turning the disgust so often directed at underprivileged addicts toward a young, middle-class golden girl seemingly without much in common with the generally supposed reasons that people turn to drugs.

However, some of the more poetic descriptions of her drug highs and the feelings they open her heart to are disconcertingly relatable. There is humanity we can connect to in Lucy, despite the crude front she presents. Rogers skilfully balances these two aspects of the character in a wholly convincing performance. Her Lucy is lethargic, aggressive, confrontational, tragic, and, at moments, shockingly mature. She gives realistic tribute to the tragedy of intelligent people making bad decisions.

McMullan’s vulnerability and her insightful delivery drives home some poignant moments in the text, such as Angela’s remark, “I don’t know why the working class get such bad press. I find the middle classes infinitely crasser.” The fraught chemistry between her and Rogers is incredibly moving, especially in a later scene illuminating a landmark moment in their history where Lucy reveals that she once saw Angela self-harming, and declares, “I learned what to do when I was sad.”

Barbara is portrayed by Jo Wragg as a proud, protective mother whose steadfast upkeep of appearances teeters constantly on the brink of old, pent-up tears. Interestingly Barbara enables Lucy’s habit, denying and avoiding issues of culpability and shame throughout. Wragg carries out this tall order with humility and even comedic charm.

Director Anna-Siobhan Lewis allows for breathing time in a drama that truly depends on it, and introduces an effectively sparing use of film projection – starring Rogers herself alongside footage of her own daughter as a young Lucy – to emphasise the loss of Lucy’s vitality and potential. While driving home the impact of scenes like this, Lewis avoids drawing the story to a neat conclusion by cutting the final scene.

She states the desire to avoid the Disney ending that seemed too glib and centred around the achievement of an end-goal, and instead focus on the journey of recovery, the decision to make a change.

The script’s imperfections, unfortunately, remain; the appearances of nurses and psychologists do slip into diatribe and cliché, and Lucy’s frustration at these weak, insincere speeches was felt by the audience. These were handled with grace by the very capable Jane Allanach and Joe Feeney.

This is a perceptive, startling, moving production and I hope to see it go further than the York arts scene on tour.