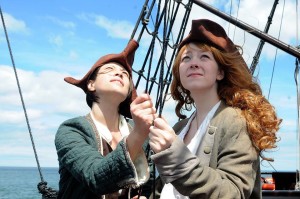 Into sea shanties and a pub sign for the Crossed Swords Inn, barmaids and punters enjoying a tranquil scene and inviting the audience into their world.

A large white sail hangs at the back of the stage to host an effective, consistent use of filmed inserts. A small bar, a chest, a table and chairs are manoeuvred smoothly between scenes to create a number of different locations.

This is not your typical pirate tale, but is dipped with a healthy dose of drinking, singing, adventuring, sword-fighting and banter.

Live music is provided throughout by a multi-skilled cast on a variety of instruments from cajon to violin to harp, crafting an authentic historical atmosphere and accompanying the score made up of traditional folk classics. Chiffonnette-style barmaids (Chloe Anderson and BethanyAnne Louise) proffer handy interludes of narration including a development of their own personal stories, which makes for a nice touch. 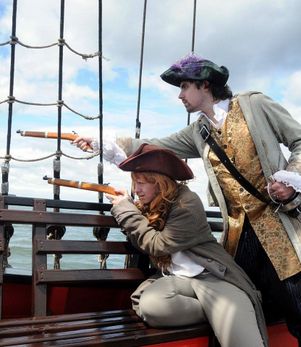 The secondary love story between Mary Read (Natalie-Claire Brimicombe) and Sam Kendrick (Richard Thirlwall) is the one that steals our hearts. Brimicombe’s gentle, serene, compassionate delivery of Read is absolutely delightful and her version of When I Was A Fair Maid is wonderful. Thirlwall’s Kendrick is a loveable, loyal shipmate whose talent for falling over is second to none.

One pratfall of the production is this relationship’s outdated reaction to gender-confusion played for comedy, though this is received well by the audience; possibly saved by the innocent charm of the actors. Henry Smythe’s (Samuel Valentine) running misguided ‘compliments’ are another little red flag to feminism; sadly, his comeuppance isn’t at the hand of a ‘complimented’ woman, although this is perhaps balanced by the more riling James Bonny’s (James Tyler) demise at the hand of Mary Read.

While these romances are abruptly introduced and dissolved, sisterhood between the female leads prevails in a rare bond of courage, trust and personal integrity. This culminates in Bonny’s acute sense of loss when Mary dies next to her in prison while they are both pregnant and awaiting retrial, preceded by a moving full-cast rendition of My Bonnie Lies over the Ocean.

Newton’s script comprises a complementary blend of modern and historical language, making for an accessible story in which you are rooting for the protagonists all the way, especially when you realise that half the cast are actors who have heroically stepped into the roles somewhere down the line in rehearsals, the latest joining one week before opening night.

One Response to Adventure, comedy and sea shanties in Crossed Swords