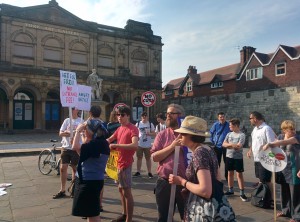 Protesters gathered outside the York Art Gallery to oppose its new entry fees, support National Gallery strikers and draw attention to cuts to the arts.

The art gallery is set to reopen on 1st August and will have a new entry fee of £7.50 for adults, while children under 16 go free if accompanied by an adult. It has been closed for refurbishment since 2013 and was free entry for all before that.

Protesters criticised cuts to the arts across the UK, with the new art gallery prices cited as a result of that. Additionally, they noted that City of York Council has withdrawn funding from the grassroots Arts Barge project and for a digital arts centre, which was due to be set up in the Guildhall.

Hazel Palmer of York People’s Assembly said: “The arts are an important part of people’s humanity. They provide a focus for the community and help us make sense of the world around us. They shouldn’t just be a privilege for people with money.”

Mr Clark added: “In this economic landscape York Museums Trust is having to adapt and look for new ways to create funds. It is only by becoming more of a cultural business rather than a cultural service that the Trust will continue to thrive and inspire visitors while remaining a key part of York’s cultural offer.”

In addition to the local arts funding issues, the protesters also focussed on strikes at the National Gallery, where a private company is set to take over employment of 400 staff members.