The Holy Orders: ‘We’re not a band that formed with the intention of people liking us’ 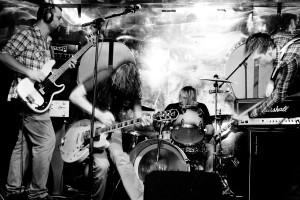 The Holy Orders are known for their energetic live shows. (Photo by Ben Brady)

Since their formation in 2006, The Holy Orders have been creating music, touring and making a name for themselves in Yorkshire and beyond.

Hailing from Hull, they have come over to play in York a number of times. Their next gig in the city is at Spread Eagle on 16th October, opening for Turrentine Jones.

Arts York spoke to vocalist Matt Edible about the band’s history, touring and what it is that inspires and drives them to keep making music and performing.

Q: How did The Holy Orders come to be?

A: I’d split up my previous band, Edible 5ft Smiths, because life was getting in the way for everybody. It felt like trying to keep a band together was a constant battle and it was really getting me down. After a bit of time off, I was really missing having a band, so I started putting this band together. We had a few very different line-ups to start off with but eventually we settled into this one, which really gelled.

Q: What made you choose the name The Holy Orders?

A: After being in a band called Edible 5ft Smiths, I wanted to have a break from the inevitable comments that an odd name drew. We threw a lot of ideas round for a band name. There’s obviously still some ambiguity to the name – the term Holy Orders is used in the Catholic Church, which is sinister enough, but when you add the definite article to the front of it, it starts to imply all sorts. We still get the comments, mainly people thinking that we’re a religious band. They soon realise, quite often when we’re playing a song like Dance Motherfuckers, that this is certainly not the case.

Q: You toured in August, how did that go?

A: We’ve been touring more than ever this year. It’s been great. Because we’re playing so much, we know that we’re always going to put on a great show, which means we can really relax and enjoy it. The attendances have been better than ever as. We still have the odd gig where we’re just playing to the sound engineer and the bar staff but, rest assured, they still get a bloody good show.

Q: You’ve got an EP out in October, The Worst Day Since Records Began, what was the inspiration for that?

A: The first years of the band were spent putting our debut album, For the Ears of Dogs to Come, together. We felt it was really important to release an album first, so that we had a clear body of work. After releasing that in 2013, we’ve been able to relax into the songwriting process and start to experiment with what we’re doing a lot more. The songs are still definitely The Holy Orders but we feel more comfortable letting our leftfield side show. We’ve played around with some more alternative song structures – not that we’ve ever written pop songs – and the title track is a 12 minute-plus instrumental track.

As it happens, the label we were going to put out the EP with has just disbanded so we are having to reassess the EP. We’re actually looking at extending it to be a full album for release next year. We prefer albums anyway – there’s much more scope for giving a full picture of where a band is at. We’re going to look at the possibilities of releasing it with another label. Failing, that we’ll be releasing it ourselves. We’re still going to release another single before the end of the year though.

Q: Your EP has a pretty cool title too, how did you come up with it?

A: With rolling news the way it is these days, it seems like a day can’t go by without something being called the highest or lowest something or other since records began. Why not just call it in absolutes?

Q: What bands, people or experiences influence your music?

A: We’ve got a massive range of musical influences. It would be futile to try and list all of them. On our way to and from gigs recently we’ve been listening to a lot of Godspeed You! Black Emperor, Shellac, Leonard Cohen, Death Grips, Future of the Left and Father John Misty to name but a few. I go to a lot of the ATP festivals – they’re really great for finding new things to get excited about. I find discomfort in any art form is really exciting. Whether it’s the monotonous repetition of Samuel Beckett, the oppressive vacuums of Mark Rothko or the harsh confusion of David Lynch.

Q: You’ve been a band since 2006, what is it that keeps you guys together and gives you the drive to keep performing?

A: We’re not a band that formed with the intention of people liking us. We make the music that we do out of a real desire to produce something worthwhile. That’s not to say that we don’t get a huge sense of worth and enjoyment from people enjoying what we do. There’s nothing better than knowing that people get something from our music like we get satisfaction from the music that we consume.

Q: What would you say has been the high point of your time as Holy Orders so far?

A: Tom Robinson asked us onto his BBC 6Music show to do a session around the time of our album release. That was a brilliant experience. 6Music is a brilliant station and Tom Robinson is a great champion of bands – as well as a great musician himself.

Q: What has been the low point?

A: Well, being in a band trying to get to a point where we can give up our jobs and just make music is full of low points! Every little hint at something big feels like it might be the thing that will give us enough freedom to do it full-time but then doesn’t quite come off. We’ve learned not to get over excited about potential breaks these days but it’d be a lie to stay that we weren’t still disappointed from time to time. Don’t get me wrong, we don’t want to be the biggest band in the world, or even a household name – we’d have to make much less interesting music to do that – we’d just like to be at a point where what we do can support us and allow us to keep making music. Mind you, I guess that there are a lot of bands that would say exactly the same thing.

Q: Have you played in York before and are you planning to any time soon?

A: We’ve played in York a few times. We’re only just down the road in Hull so it’s a really convenient place to get to. We actually finished our tour earlier this year at the Fulford Arms, which is an amazing place. It was, hands down, the best date on that tour. A brilliant venue with great principals and amazing people who had come out because they love music. We’re hoping to play there again at the start of next year.

Q: What advice would you give to bands just starting out?

A: Don’t try and be somebody else. Listen to as much music as you can, don’t limit yourself to genres or what’s cool. Then just make music that feels natural to you. And learn to tune your instruments by ear, make sure you can recognise when you’re out of tune. Don’t even go on stage until you can do that. And then, and only then, before you ever play a note on stage, buy a tuner and use it.

One Response to The Holy Orders: ‘We’re not a band that formed with the intention of people liking us’