First Encounters with Shakespeare: The Comedy of Errors 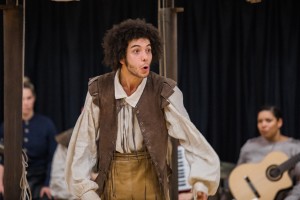 First Encounters with Shakespeare’s ‘The Comedy of Errors’

The Royal Shakespeare Company presents First Encounters with Shakespeare, a series of productions for 7-13 year olds across the UK. The Comedy of Errors, directed and edited by Alex Thorpe, comes to York Theatre Royal with over a decade’s experience in bringing Shakespeare’s original text into palatable, engaging versions to children in their communities.

At first glance The Comedy of Errors seems an ideal way to introducte Shakespeare to children. Multiple twins, punch-ups and terrible misunderstandings ensure a visual romp sure to dispel the myth of men in fusty-smelling costumes languishing over incomprehensible words. As promised, this production is highly accessible (too accessible, but more of that later). From the second the actors arrive in the lit auditorium and begin chatting loudly with the audience – “Oh I like your shoes! Hey, show my sister your shoes” – the barriers are down and we are all on board. We barely notice as they slip onto the stage and build a gorgeous soundscape of percussion and lyrical ad-libbing. So engrossed are we in the choral singing and physical comedy that we forget we have come to watch something written over four hundred years ago. Like my aunt teaching me to ride a bike, First Encounters with Shakespeare: The Comedy of Errors accelerates, lets go of our hands, and suddenly we are thoroughly enjoying ourselves and wondering what the big deal is, really.

Like the costumes – wedged trainers and lots of soft fabric in muted colours – the direction is unmistakably contemporary, without being jarring. Humour and modernity are dragged out of every line, with “For God’s sake!” and the occasional sarcastic “No!” keeping the tone fresh and grounding the action in the familiar. Of the kids I speak to afterwards, most say they haven’t understood what was happening, but all say they enjoyed it. Moment to moment, it is comprehensive; you don’t need to know why money is being handed over to find Dromio of Syracuse’s ‘descending from heaven’ sound effects hilarious. Pacing is the key here and they nail it, mutual nervous laughter giving way to tears or shouting at just the right time, with increasing audience interaction lending a joyous sense of unraveling to the whole production.

There the review should end, with news of a jolly romp for all the family. Except that half-way through the jolly romp, Antipholus Of Ephesus, having been locked out of his house, turns to his slave and says:

“Go thou and buy a rope’s end: that will I bestow among my wife.”

Now, maybe I’m being terribly fussy. Shakespeare’s old; they had funny ideas in the olden days. The trouble is, this production isn’t old. It establishes itself as cool and modern, and then a man just casually announces his intention to beat his wife. Yes, it probably goes over the heads of much of the young audience, but relying on their not understanding the problematic bits seems to rather miss the point of trying to make the play accessible to children.

Later Antipholus does assault his wife, but it’s OK because in this modern version she knows self-defence and overpowers him. Actually it’s sold as humorous, because we’re expecting the man to injure his wife, but she wins. So it’s funny. I’m just still not laughing. We have just sat an audience of 7–13 year-olds down in a proper theatre, with luscious red velvet curtains and a dress circle, at just-after-bed-time, promising to introduce them to the work of the most revered playwright who has ever existed, and we are showing them that domestic abuse can be funny. There are no repercussions whatsoever. In fact later the wife is told she has been too much of a nag, and brought it all on herself.

Less problematic plays would have been flawless given the same treatment, and there was a lot to love, but this production’s accessibility was precisely why I wouldn’t take a child to see it.

Read more about the company and the production here.